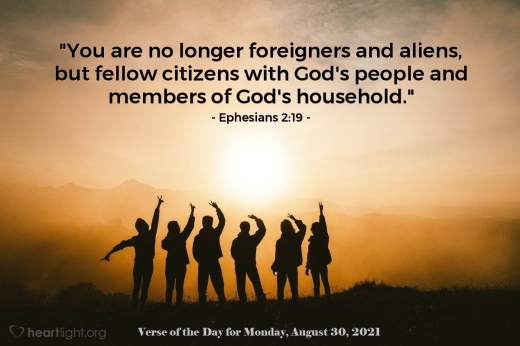 You are no longer foreigners and strangers, but fellow citizens with God’s people and also members of his household.

The notion of one’s primary citizenship being in the kingdom of God, rather than in the political realities of the day, continued to influence how the early Christians understood their place in the world. The Letter to Diognetus reveals how the early Christian communities were perceived by their neighbors. “They live in their own countries, but only as aliens. They have a share in everything as citizens, and endure everything as foreigners. Every foreign land is their fatherland, and yet for them every fatherland is a foreign land… They busy themselves on earth, but their citizenship is in heaven.”
Read all of Ephesians Chapter 2