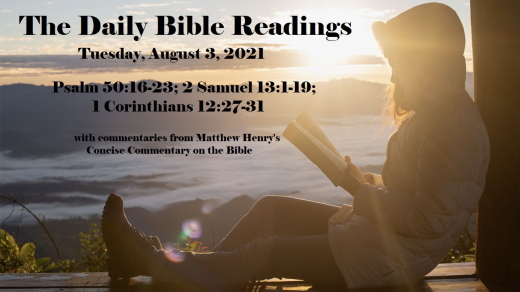 The Daily Bible Readings
Tuesday, August 3, 2021
Psalm 50:16-23; 2 Samuel 13:1-19; 1 Corinthians 12:27-31
with commentaries from Matthew Henry's Concise Commentary on the Bible
Introduction
In today’s lectionary readings, in the psalms, God addresses the wicked, saying they thought He would be silent and leave them to their destructive ways, but He reminds them that He will judge them for their wicked ways and unbelief. From the Prophets, we read a story of how in God’s wisdom, He gives us crucial insight into how impure sex can alter a person’s heart, and why. In our epistle reading, Paul explains to the Corinthians that each one of them has a part of the body of Christ. In our verse of the day, we learn that God judges a person by his heart, not appearance.

Before Samuel had even met David, the Lord chose him to lead Israel (1 Sam. 13:14). Yet even a godly man like Samuel couldn’t help but judge a man by his appearance. This is why we must continually go to the Lord for His wisdom; only He sees the heart. At his young age, David already knew the importance of obeying God fully, which is why the Lord could work through him and develop him into the ruler Israel needed (1 Sam. 16:7; Acts 13:22).

From the Books of the Prophets
2 Samuel 13:1-19
The Rape of Tamar
13:1 In the course of time, Amnon son of David fell in love with Tamar, the beautiful sister of Absalom son of David.

2 Amnon became so obsessed with his sister Tamar that he made himself ill. She was a virgin, and it seemed impossible for him to do anything to her.

3 Now Amnon had an adviser named Jonadab son of Shimeah, David’s brother. Jonadab was a very shrewd man. 4 He asked Amnon, “Why do you, the king’s son, look so haggard morning after morning? Won’t you tell me?”

Amnon said to him, “I’m in love with Tamar, my brother Absalom’s sister.”

5 “Go to bed and pretend to be ill,” Jonadab said. “When your father comes to see you, say to him, ‘I would like my sister Tamar to come and give me something to eat. Let her prepare the food in my sight so I may watch her and then eat it from her hand.’”

6 So Amnon lay down and pretended to be ill. When the king came to see him, Amnon said to him, “I would like my sister Tamar to come and make some special bread in my sight, so I may eat from her hand.”

7 David sent word to Tamar at the palace: “Go to the house of your brother Amnon and prepare some food for him.” 8 So Tamar went to the house of her brother Amnon, who was lying down. She took some dough, kneaded it, made the bread in his sight and baked it. 9 Then she took the pan and served him the bread, but he refused to eat.

“Send everyone out of here,” Amnon said. So everyone left him. 10 Then Amnon said to Tamar, “Bring the food here into my bedroom so I may eat from your hand.” And Tamar took the bread she had prepared and brought it to her brother Amnon in his bedroom. 11 But when she took it to him to eat, he grabbed her and said, “Come to bed with me, my sister.”

12 “No, my brother!” she said to him. “Don’t force me! Such a thing should not be done in Israel! Don’t do this wicked thing. 13 What about me? Where could I get rid of my disgrace? And what about you? You would be like one of the wicked fools in Israel. Please speak to the king; he will not keep me from being married to you.” 14 But he refused to listen to her, and since he was stronger than she, he raped her.

15 Then Amnon hated her with intense hatred. In fact, he hated her more than he had loved her. Amnon said to her, “Get up and get out!”

16 “No!” she said to him. “Sending me away would be a greater wrong than what you have already done to me.”

But he refused to listen to her. 17 He called his personal servant and said, “Get this woman out of my sight and bolt the door after her.” 18 So his servant put her out and bolted the door after her. She was wearing an ornate robe, for this was the kind of garment the virgin daughters of the king wore. 19 Tamar put ashes on her head and tore the ornate robe she was wearing. She put her hands on her head and went away, weeping aloud as she went.

Commentary
From henceforward David was followed with one trouble after another. Adultery and murder were David's sins, the like sins among his children were the beginnings of his punishment: he was too indulgent to his children. Thus David might trace the sins of his children to his own misconduct, which must have made the anguish of the chastisement worse. Let no one ever expect good treatment from those who are capable of attempting their seduction; but it is better to suffer the greatest wrong than to commit the least sin.

From the Epistles
1 Corinthians 12:27-31
You are the Body of Christ
12:27 Now you are the body of Christ, and each one of you is a part of it. 28 And God has placed in the church first of all apostles, second prophets, third teachers, then miracles, then gifts of healing, of helping, of guidance, and of different kinds of tongues. 29 Are all apostles? Are all prophets? Are all teachers? Do all work miracles? 30 Do all have gifts of healing? Do all speak in tongues? Do all interpret? 31 Now eagerly desire the greater gifts.

And yet I will show you the most excellent way.

Commentary
Contempt, hatred, envy, and strife, are very unnatural in Christians. It is like the members of the same body being without concern for one another, or quarreling with each other. The proud, contentious spirit that prevailed, as to spiritual gifts, was thus condemned. The offices and gifts, or favors, dispensed by the Holy Spirit, are noticed. Chief ministers; persons enabled to interpret Scripture; those who labored in word and doctrine; those who had power to heal diseases; such as helped the sick and weak; such as disposed of the money given in charity by the church, and managed the affairs of the church; and such as could speak divers languages. What holds the last and lowest rank in this list, is the power to speak languages; how vain, if a man does so merely to amuse or to exalt himself! See the distribution of these gifts, not to every one alike, vers. 1 Corinthians 12:29; 30. This were to make the church all one, as if the body were all ear, or all eye. The Spirit distributes to every one as he will. We must be content though we are lower and less than others. We must not despise others, if we have greater gifts. How blessed the Christian church, if all the members did their duty! Instead of coveting the highest stations, or the most splendid gifts, let us leave the appointment of his instruments to God, and those in whom he works by his providence. Remember, those will not be approved hereafter who seek the chief places, but those who are most faithful to the trust placed in them, and most diligent in their Master's work.