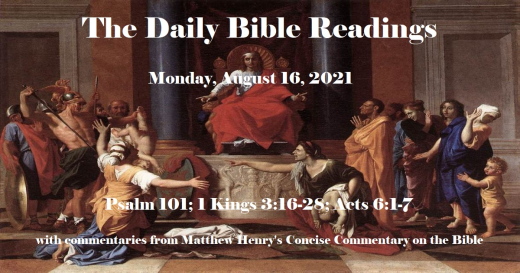 The Daily Bible Readings
Monday, August 16, 2021
Psalm 101; 1 Kings 3:16-28; Acts 6:1-7
with commentaries from Matthew Henry's Concise Commentary on the Bible
Introduction
In today’s lectionary readings, our psalm is Psalm of David as the man after God’s own heart when he was about to become king in Israel. The reading from 1 Kings displays King Solomon’s wisdom between two prostitutes and a baby. In our reading from the Book of Acts, seven are chosen as deacons to distribute food to widows of the Hellenistic Jews. Our verse of the day comes from the Apostle Paul’s writings to the Corinthians; as Christians, we must purify ourselves from everything that contaminates body and spirit.
Today’s Verse of the Day:
2 Corinthians 7:1

Therefore, since we have these promises, dear friends, let us purify ourselves from everything that contaminates body and spirit, perfecting holiness out of reverence for God.

The promises of God are meant to lead us to purity of life, but they do not do so automatically. As we wait in faith for them to be fulfilled, we learn to flee from sin, rely on Him, take comfort in His Word, and listen for His voice. Through His wonderful promises to us, we also realize He has a much better plan for us than we have for ourselves.
Today’s Lectionary Readings:
From the Psalter
Psalm 101
I will Walk with Integrity of Heart
1 I will sing of your love and justice;
to you, Lord, I will sing praise.
2 I will be careful to lead a blameless life—
when will you come to me?

I will conduct the affairs of my house
with a blameless heart.
3 I will not look with approval
on anything that is vile.

I hate what faithless people do;
I will have no part in it.
4 The perverse of heart shall be far from me;
I will have nothing to do with what is evil.

5 Whoever slanders their neighbor in secret,
I will put to silence;
whoever has haughty eyes and a proud heart,
I will not tolerate.

6 My eyes will be on the faithful in the land,
that they may dwell with me;
the one whose walk is blameless
will minister to me.

7 No one who practices deceit
will dwell in my house;
no one who speaks falsely
will stand in my presence.

8 Every morning I will put to silence
all the wicked in the land;
I will cut off every evildoer
from the city of the Lord.

Commentary
This psalm was composed by David, probably at the commencement of his reign. It contains a number of resolutions upon which he was prepared to act. First, he made up his mind that he would give heed to the perfect way , and would walk in his house in the integrity of his heart, Psalms 101:2 , r.v., margin. Next, he made up his mind to choose his friends with rigorous care, that froward hearts and evil persons should depart from him; that he would not enter into close relations with those that slandered their neighbors, or that gave evidence by their high looks of proud hearts. Deceit and falsehood were alike to be banished from his palace; while faithful souls, who also walked in “the perfect way,” should minister to him. Finally, he made up his mind to carry out his rule in the public state, that the wicked might be put out of the way and the righteous exalted.

It was an excellent program, and happy would he have been if, throughout his life, he had rigorously adhered to it. It is not possible for us to exercise David’s absolute power in the selection of our environment. It is often necessary for us to work in places of business among those whom we would not choose as associates. But we can, at least, forbear making any of these our intimates, or the friends with whom we spend our leisure and recreational hours, 1 Corinthians 5:9-11 (F.B. Meyer's 'Through the Bible' Commentary).
From the Books of the Prophets
1 Kings 3:16-28
Solomon’s Wisdom Displayed
3:16 Now two prostitutes came to the king and stood before him. 17 One of them said, “Pardon me, my lord. This woman and I live in the same house, and I had a baby while she was there with me. 18 The third day after my child was born, this woman also had a baby. We were alone; there was no one in the house but the two of us.

19 “During the night this woman’s son died because she lay on him. 20 So she got up in the middle of the night and took my son from my side while I your servant was asleep. She put him by her breast and put her dead son by my breast. 21 The next morning, I got up to nurse my son—and he was dead! But when I looked at him closely in the morning light, I saw that it wasn’t the son I had borne.”

But the first one insisted, “No! The dead one is yours; the living one is mine.” And so they argued before the king.

24 Then the king said, “Bring me a sword.” So they brought a sword for the king. 25 He then gave an order: “Cut the living child in two and give half to one and half to the other.”

26 The woman whose son was alive was deeply moved out of love for her son and said to the king, “Please, my lord, give her the living baby! Don’t kill him!”

But the other said, “Neither I nor you shall have him. Cut him in two!”

27 Then the king gave his ruling: “Give the living baby to the first woman. Do not kill him; she is his mother.”

28 When all Israel heard the verdict the king had given, they held the king in awe, because they saw that he had wisdom from God to administer justice.
Commentary
An instance of Solomon's wisdom is given. Notice the difficulty of the case. To find out the true mother, he could not try which the child loved best, and therefore tried which loved the child best: the mother's sincerity will be tried, when the child is in danger. Let parents show their love to their children, especially by taking care of their souls, and snatching them as brands out of the burning. By this and other instances of the wisdom with which God endued him, Solomon had great reputation among his people. This was better to him than weapons of war; for this he was both feared and loved.
From the Book of Acts
Acts 6:1-7
Deacons Chosen to Distribute Food
6:1 In those days when the number of disciples was increasing, the Hellenistic Jews among them complained against the Hebraic Jews because their widows were being overlooked in the daily distribution of food. 2 So the Twelve gathered all the disciples together and said, “It would not be right for us to neglect the ministry of the word of God in order to wait on tables. 3 Brothers and sisters, choose seven men from among you who are known to be full of the Spirit and wisdom. We will turn this responsibility over to them 4 and will give our attention to prayer and the ministry of the word.”

5 This proposal pleased the whole group. They chose Stephen, a man full of faith and of the Holy Spirit; also Philip, Procorus, Nicanor, Timon, Parmenas, and Nicolas from Antioch, a convert to Judaism. 6 They presented these men to the apostles, who prayed and laid their hands on them.

7 So the word of God spread. The number of disciples in Jerusalem increased rapidly, and a large number of priests became obedient to the faith.
Commentary
Hitherto the disciples had been of one accord; this often had been noticed to their honor; but now they were multiplied, they began to murmur. The word of God was enough to take up all the thoughts, cares, and time of the apostles. The persons chosen to serve tables must be duly qualified. They must be filled with gifts and graces of the Holy Ghost, necessary to rightly managing this trust; men of truth, and hating covetousness. All who are employed in the service of the church, ought to be commended to the Divine grace by the prayers of the church. They blessed them in the name of the Lord. The word and grace of God are greatly magnified, when those are wrought upon by it, who were least likely.