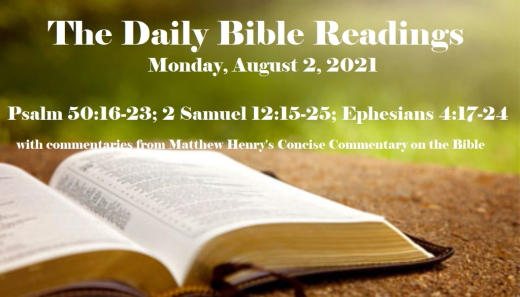 The Daily Bible Readings
Monday, August 2, 2021
Psalm 50:16-23; 2 Samuel 12:15-25; Ephesians 4:17-24
with commentaries from Matthew Henry's Concise Commentary on the Bible
Introduction
In today’s lectionary readings, in the psalms, God addresses the wicked, saying they thought He would be silent and leave them to their destructive ways, but He reminds them that He will judge them for their wicked ways and unbelief. From the Prophets, we read a story of tragedy and triumph. We see the tragedy in the great fall of a great person. David was brought to terrible grief by his terrible sin. However, it is also the story of triumph. As awful as David’s heartache was, he refused to allow it to become the defining moment of this life. Our epistle reading describes the changes in our thinking and behavior in very general terms, which being “in Christ” requires. In our verse of the day, we learn that obeying God’s Word is not always easy. Many of His commands require sacrifice and even suffering.

Do not merely listen to the word, and so deceive yourselves. Do what it says.

Obeying God’s Word is not always easy. Many of His commands require sacrifice and even suffering. This was true for those in the Jewish community who confessed Jesus as their Savior. They had to leave their homes and endure persecution for their testimonies. The Lord understands the difficulty in submitting ourselves to Him, but He still calls us to obey Him and allow Him to handle the consequences. We must apply His principles to our lives, because that is the only way we will find true victory over sin and death—in Him.

From the Books of the Prophets
2 Samuel 12:15-25
David and Bathsheba’s Son Dies
12:15 After Nathan had gone home, the Lord struck the child that Uriah’s wife had borne to David, and he became ill. 16 David pleaded with God for the child. He fasted and spent the nights lying in sackcloth on the ground. 17 The elders of his household stood beside him to get him up from the ground, but he refused, and he would not eat any food with them.

18 On the seventh day the child died. David’s attendants were afraid to tell him that the child was dead, for they thought, “While the child was still living, he wouldn’t listen to us when we spoke to him. How can we now tell him the child is dead? He may do something desperate.”

19 David noticed that his attendants were whispering among themselves, and he realized the child was dead. “Is the child dead?” he asked.

20 Then David got up from the ground. After he had washed, put on lotions and changed his clothes, he went into the house of the Lord and worshiped. Then he went to his own house, and at his request they served him food, and he ate.

21 His attendants asked him, “Why are you acting this way? While the child was alive, you fasted and wept, but now that the child is dead, you get up and eat!”

22 He answered, “While the child was still alive, I fasted and wept. I thought, ‘Who knows? The Lord may be gracious to me and let the child live.’ 23 But now that he is dead, why should I go on fasting? Can I bring him back again? I will go to him, but he will not return to me.”

24 Then David comforted his wife Bathsheba, and he went to her and made love to her. She gave birth to a son, and they named him Solomon. The Lord loved him; 25 and because the Lord loved him, he sent word through Nathan the prophet to name him Jedidiah.

Commentary
David now penned the 51st Psalm, in which, though he had been assured that his sin was pardoned, he prays earnestly for pardon, and greatly laments his sin. He was willing to bear the shame of it, to have it ever before him, to be continually upbraided with it. God gives us leave to be earnest with him in prayer for particular blessings, from trust in his power and general mercy, though we have no particular promise to build upon. David patiently submitted to the will of God in the death of one child, and God made up the loss to his advantage, in the birth of another. The way to have creature comforts continued or restored, or the loss made up some other way, is cheerfully to resign them to God. God, by his grace, particularly owned and favored that son, and ordered him to be called Jedidiah, Beloved of the Lord. Our prayers for our children are graciously and as fully answered when some of them die in their infancy, for they are well taken care of, and when others live, "beloved of the Lord."

From the Epistles
Ephesians 4:17-24
The New Life
4:17 So I tell you this, and insist on it in the Lord, that you must no longer live as the Gentiles do, in the futility of their thinking. 18 They are darkened in their understanding and separated from the life of God because of the ignorance that is in them due to the hardening of their hearts. 19 Having lost all sensitivity, they have given themselves over to sensuality so as to indulge in every kind of impurity, and they are full of greed.

20 That, however, is not the way of life you learned 21 when you heard about Christ and were taught in him in accordance with the truth that is in Jesus. 22 You were taught, with regard to your former way of life, to put off your old self, which is being corrupted by its deceitful desires; 23 to be made new in the attitude of your minds; 24 and to put on the new self, created to be like God in true righteousness and holiness.

Commentary
The apostle charged the Ephesians in the name and by the authority of the Lord Jesus, that having professed the gospel, they should not be as the unconverted Gentiles, who walked in vain fancies and carnal affections. Do not men, on every side, walk in the vanity of their minds? Must not we then urge the distinction between real and nominal Christians? They were void of all saving knowledge; they sat in darkness, and loved it rather than light. They had a dislike and hatred to a life of holiness, which is not only the way of life God requires and approves, and by which we live to him, but which has some likeness to God himself in his purity, righteousness, truth, and goodness. The truth of Christ appears in its beauty and power, when it appears as in Jesus. The corrupt nature is called a man; like the human body, it is of divers parts, supporting and strengthening one another. Sinful desires are deceitful lusts; they promise men happiness, but render them more miserable; and bring them to destruction, if not subdued and mortified. These therefore must be put off, as an old garment, a filthy garment; they must be subdued and mortified. But it is not enough to shake off corrupt principles; we must have gracious ones. By the new man, is meant the new nature, the new creature, directed by a new principle, even regenerating grace, enabling a man to lead a new life of righteousness and holiness. This is created, or brought forth by God's almighty power.