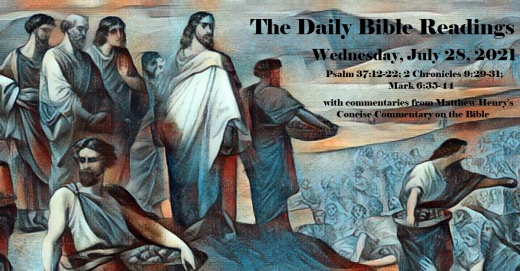 The Daily Bible Readings
Wednesday, July 28, 2021
Psalm 37:12-22; 2 Chronicles 9:29-31; Mark 6:35-44 (NIV)
with commentaries from Matthew Henry's Concise Commentary on the Bible
Introduction
In today’s lectionary readings, we read that the little allotted to the righteous is more comfortable and more profitable than the ill-gotten and abused riches of ungodly men. From the Prophets, we read about the death of King Solomon. In our epistle reading, we about another miracle of Jesus as he feeds the 5000. In our verse of the day, we learn that we have not yet reached the Lord’s goal, that we must press on.

Today’s Verse of the Day:
Philippians 3:14

I press on toward the goal to win the prize for which God has called me heavenward in Christ Jesus.

Life Lessons: Even the apostle Paul realized he had not yet reached the Lord’s goal for him—which was to know and reflect Jesus fully and completely (Rom. 8:29; Phil. 1:21; 3:8–11). Paul’s judgment about himself should help to humble us and motivate us to acknowledge that we all have a long way to go. We can’t dwell on the past—celebrating spiritual victories or mourning defeats. We must press on with the mindset that there is always more to be learned, submitted, expressed, and experienced in Christ.

14 The wicked draw the sword
and bend the bow
to bring down the poor and needy,
to slay those whose ways are upright.
15 But their swords will pierce their own hearts,
and their bows will be broken.

16 Better the little that the righteous have
than the wealth of many wicked;
17 for the power of the wicked will be broken,
but the Lord upholds the righteous.

18 The blameless spend their days under the Lord’s care,
and their inheritance will endure forever.
19 In times of disaster they will not wither;
in days of famine they will enjoy plenty.

20 But the wicked will perish:
Though the Lord’s enemies are like the flowers of the field,
they will be consumed, they will go up in smoke.

21 The wicked borrow and do not repay,
but the righteous give generously;
22 those the Lord blesses will inherit the land,
but those he curses will be destroyed.

Commentary
Let us be satisfied that God will make all to work for good to us. Let us not discompose ourselves at what we see in this world. A fretful, discontented spirit is open to many temptations. For, in all respects, the little which is allotted to the righteous, is more comfortable and more profitable than the ill-gotten and abused riches of ungodly men. It comes from a hand of special love. God provides plentifully and well, not only for his working servants, but for his waiting servants. They have that which is better than wealth, peace of mind, peace with God, and then peace in God; that peace which the world cannot give, and which the world cannot have. God knows the believer's days. Not one day's work shall go unrewarded. Their time on earth is reckoned by days, which will soon be numbered; but heavenly happiness shall be for ever. This will be a real support to believers in evil times. Those that rest on the Rock of ages, have no reason to envy the wicked the support of their broken reeds.

From the Historical Books
2 Chronicles 9:29-31
Nathan Writes a History
9:29 As for the other events of Solomon’s reign, from beginning to end, are they not written in the records of Nathan the prophet, in the prophecy of Ahijah the Shilonite and in the visions of Iddo the seer concerning Jeroboam son of Nebat? 30 Solomon reigned in Jerusalem over all Israel forty years. 31 Then he rested with his ancestors and was buried in the city of David his father. And Rehoboam his son succeeded him as king.

Commentary
Here is Solomon dying, and leaving all his wealth and power to one who he knew would be a fool! Ecclesiastes 2:18; 19. This was not only vanity, but vexation of spirit. Neither power, wealth, nor wisdom, can ward off or prepare for the stroke of death. But thanks be to God who gives the victory to the true believer, even over this dreaded enemy, through Jesus Christ our Lord.

From the Gospels
Mark 6:35-44
Jesus Feeds 5000
6:35 By this time it was late in the day, so his disciples came to him. “This is a remote place,” they said, “and it’s already very late. 36 Send the people away so that they can go to the surrounding countryside and villages and buy themselves something to eat.”

37 But he answered, “You give them something to eat.”

They said to him, “That would take more than half a year’s wages! Are we to go and spend that much on bread and give it to them to eat?”

When they found out, they said, “Five—and two fish.”

39 Then Jesus directed them to have all the people sit down in groups on the green grass. 40 So they sat down in groups of hundreds and fifties. 41 Taking the five loaves and the two fish and looking up to heaven, he gave thanks and broke the loaves. Then he gave them to his disciples to distribute to the people. He also divided the two fish among them all. 42 They all ate and were satisfied, 43 and the disciples picked up twelve basketfuls of broken pieces of bread and fish. 44 The number of the men who had eaten was five thousand.

Commentary
Let not ministers do any thing or teach any thing, but what they are willing should be told to their Lord. Christ notices the frights of some, and the toils of others of his disciples, and provides rest for those that are tired, and refuge for those that are terrified. The people sought the spiritual food of Christ's word, and then he took care that they should not want bodily food. If Christ and his disciples put up with mean things, surely we may. And this miracle shows that Christ came into the world, not only to restore, but to preserve and nourish spiritual life; in him there is enough for all that come. None are sent empty away from Christ but those who come to him full of themselves. Though Christ had bread enough at command, he teaches us not to waste any of God's bounties, remembering how many are in want. We may, some time, need the fragments that we now throw away.