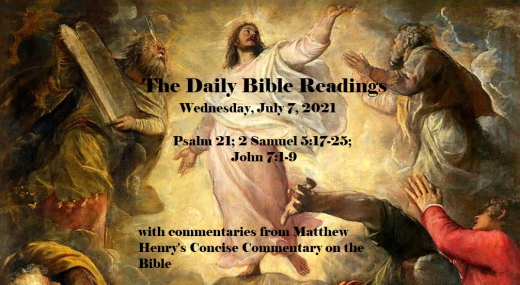 As for God, his way is perfect: The Lord’s word is flawless; he shields all who take refuge in him.

Psalm 18 bears a strong resemblance to David’s song of praise in 2 Samuel 22, where he praised the Lord for delivering him from his enemies. Wisdom teaches us to acknowledge God’s strength and to worship Him for who He is: our Rock, our Fortress, our Shield, and our Stronghold.

From the Historical books of the Old Testament
2 Samuel 5:17-25
David Fights the Philistines
5:17 When the Philistines heard that David had been anointed king over Israel, they went up in full force to search for him, but David heard about it and went down to the stronghold. 18 Now the Philistines had come and spread out in the Valley of Rephaim; 19 so David inquired of the Lord, “Shall I go and attack the Philistines? Will you deliver them into my hands?”

The Lord answered him, “Go, for I will surely deliver the Philistines into your hands.”

20 So David went to Baal Perazim, and there he defeated them. He said, “As waters break out, the Lord has broken out against my enemies before me.” So that place was called Baal Perazim. 21 The Philistines abandoned their idols there, and David and his men carried them off.

22 Once more the Philistines came up and spread out in the Valley of Rephaim; 23 so David inquired of the Lord, and he answered, “Do not go straight up, but circle around behind them and attack them in front of the poplar trees. 24 As soon as you hear the sound of marching in the tops of the poplar trees, move quickly, because that will mean the Lord has gone out in front of you to strike the Philistine army.” 25 So David did as the Lord commanded him, and he struck down the Philistines all the way from Gibeon to Gezer.

Commentary
The Philistines considered not that David had the presence of God with him, which Saul had forfeited and lost. The kingdom of the Messiah, as soon as it was set up in the world, was thus attacked by the powers of darkness. The heathen raged, and the kings of the earth set themselves to oppose it; but all in vain, Psalms 2:1. The destruction will turn, as this did, upon Satan's own kingdom. David owns dependence on God for victory and refers himself to the good pleasure of God, Wilt thou do it? The assurance God has given us of victory over our spiritual enemies, should encourage us in our spiritual conflicts. David waited till God moved; he stirred then, but not till then. He was trained up in dependence on God and his providence. God performed his promise, and David failed not to improve his advantages. When the kingdom of the Messiah was to be set up, the apostles, who were to beat down the devil's kingdom, must not attempt any thing till they received the promise of the Spirit; who came with a sound from heaven, as of a rushing, mighty wind, Acts 2:2.

From the Gospels
John 7:1-9
Unbelief of Jesus’ Brothers
7:1 After this, Jesus went around in Galilee. He did not want to go about in Judea because the Jewish leaders there were looking for a way to kill him. 2 But when the Jewish Festival of Tabernacles was near, 3 Jesus’ brothers said to him, “Leave Galilee and go to Judea, so that your disciples there may see the works you do. 4 No one who wants to become a public figure acts in secret. Since you are doing these things, show yourself to the world.” 5 For even his own brothers did not believe in him.

6 Therefore Jesus told them, “My time is not yet here; for you any time will do. 7 The world cannot hate you, but it hates me because I testify that its works are evil. 8 You go to the festival. I am not going up to this festival, because my time has not yet fully come.” 9 After he had said this, he stayed in Galilee.

Commentary
The brethren or kinsmen of Jesus were disgusted, when they found there was no prospect of worldly advantages from him. Ungodly men sometimes undertake to counsel those employed in the work of God; but they only advise what appears likely to promote present advantages.