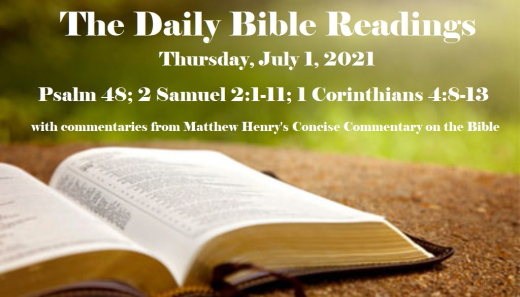 For by the grace given me I say to every one of you: Do not think of yourself more highly than you ought, but rather think of yourself with sober judgment, in accordance with the faith God has distributed to each of you.

Study Note: Paul’s ministry exists only because of grace (1:5), as do spiritual gifts (Greek charismata, v. 6). Realistic assessment of one’s gift (“think with sober judgment”) is essential, and involves a recognition of one’s “measure of faith,” that is, knowing to what extent one has the faith suited for exercising particular gifts (v. 6). The faith by which we are justified is a separate question.

From the Historical books of the Old Testament
2 Samuel 2:1-11
David Becomes King of Judah
2:1 In the course of time, David inquired of the Lord. “Shall I go up to one of the towns of Judah?” he asked.

David asked, “Where shall I go?”

“To Hebron,” the Lord answered.

2 So David went up there with his two wives, Ahinoam of Jezreel and Abigail, the widow of Nabal of Carmel. 3 David also took the men who were with him, each with his family, and they settled in Hebron and its towns. 4 Then the men of Judah came to Hebron, and there they anointed David king over the tribe of Judah.

When David was told that it was the men from Jabesh Gilead who had buried Saul, 5 he sent messengers to them to say to them, “The Lord bless you for showing this kindness to Saul your master by burying him. 6 May the Lord now show you kindness and faithfulness, and I too will show you the same favor because you have done this. 7 Now then, be strong and brave, for Saul your master is dead, and the people of Judah have anointed me king over them.”

8 Meanwhile, Abner son of Ner, the commander of Saul’s army, had taken Ish-Bosheth son of Saul and brought him over to Mahanaim. 9 He made him king over Gilead, Ashuri and Jezreel, and also over Ephraim, Benjamin and all Israel.

10 Ish-Bosheth son of Saul was forty years old when he became king over Israel, and he reigned two years. The tribe of Judah, however, remained loyal to David. 11 The length of time David was king in Hebron over Judah was seven years and six months.

The spirit of Saul, which was antagonistic to David, was perpetuated in Abner, Saul's cousin and captain of the host. He at once set himself to consolidate the house of Israel around the house of Saul. Ish-bosheth was merely a puppet in his hands. While it may be true that Abner did not desire the kingship for himself, it must be remembered that it would have been poor policy on his part to seek for that position. It was easier to gather the people around a son of the dead king.

Thus the kingdom was not actually David's. It had to be gained, and seven years passed before his crowning over the whole nation (G. Campbell Morgan's Exposition on the Whole Bible).

From the Epistles of the New Testament
1 Corinthians 4:8-13
We are Weak but You are Strong
4:8 Already you have all you want! Already you have become rich! You have begun to reign—and that without us! How I wish that you really had begun to reign so that we also might reign with you! 9 For it seems to me that God has put us apostles on display at the end of the procession, like those condemned to die in the arena. We have been made a spectacle to the whole universe, to angels as well as to human beings. 10 We are fools for Christ, but you are so wise in Christ! We are weak, but you are strong! You are honored, we are dishonored! 11 To this very hour we go hungry and thirsty, we are in rags, we are brutally treated, we are homeless. 12 We work hard with our own hands. When we are cursed, we bless; when we are persecuted, we endure it; 13 when we are slandered, we answer kindly. We have become the scum of the earth, the garbage of the world—right up to this moment.

Commentary
We have no reason to be proud; all we have, or are, or do, that is good, is owing to the free and rich grace of God. A sinner snatched from destruction by sovereign grace alone, must be very absurd and inconsistent, if proud of the free gifts of God. St. Paul sets forth his own circumstances, ver. 9. Allusion is made to the cruel spectacles in the Roman games; where men were forced to cut one another to pieces, to divert the people; and where the victor did not escape with his life, though he should destroy his adversary, but was only kept for another combat, and must be killed at last. The thought that many eyes are upon believers, when struggling with difficulties or temptations, should encourage constancy and patience. "We are weak, but ye are strong." All Christians are not alike exposed. Some suffer greater hardships than others. The apostle enters into particulars of their sufferings. And how glorious the charity and devotion that carried them through all these hardships! They suffered in their persons and characters as the worst and vilest of men; as the very dirt of the world, that was to be swept away: nay, as the offscouring of all things, the dross of all things. And every one who would be faithful in Christ Jesus, must be prepared for poverty and contempt. Whatever the disciples of Christ suffer from men, they must follow the example, and fulfill the will and precepts of their Lord. They must be content, with him and for him, to be despised and abused. It is much better to be rejected, despised, and ill used, as St. Paul was, than to have the good opinion and favor of the world. Though cast off by the world as vile, yet we may be precious to God, gathered up with his own hand, and placed upon his throne.