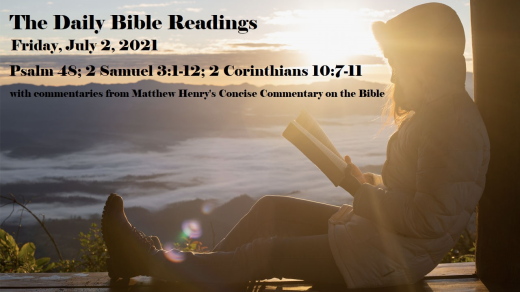 2 Sons were born to David in Hebron:

His firstborn was Amnon the son of Ahinoam of Jezreel;

3 his second, Kileab the son of Abigail the widow of Nabal of Carmel;

the third, Absalom the son of Maakah daughter of Talmai king of Geshur;

4 the fourth, Adonijah the son of Haggith;

the fifth, Shephatiah the son of Abital;

5 and the sixth, Ithream the son of David’s wife Eglah.

These were born to David in Hebron.

8 Abner was very angry because of what Ish-Bosheth said. So he answered, “Am I a dog’s head—on Judah’s side? This very day I am loyal to the house of your father Saul and to his family and friends. I haven’t handed you over to David. Yet now you accuse me of an offense involving this woman! 9 May God deal with Abner, be it ever so severely, if I do not do for David what the Lord promised him on oath 10 and transfer the kingdom from the house of Saul and establish David’s throne over Israel and Judah from Dan to Beersheba.” 11 Ish-Bosheth did not dare to say another word to Abner, because he was afraid of him.

12 Then Abner sent messengers on his behalf to say to David, “Whose land is it? Make an agreement with me, and I will help you bring all Israel over to you.”

Commentary
Verses 1-6 — The length of this war tried the faith and patience of David, and made his settlement at last the more welcome. The contest between grace and corruption in the hearts of believers, may fitly be compared to this warfare. There is a long war between them, the flesh lusting against the spirit, and the spirit against the flesh; but as the work of holiness is carried on, corruption, like the house of Saul, grows weaker and weaker; while grace, like the house of David, grows stronger and stronger.

Verses 7-12 — Many, like Abner, are not above committing base crimes, who are too proud to bear reproof, or even the suspicion of being guilty. While men go on in sin, and apparently without concern, they are often conscious that they are fighting against God. Many mean to serve their own purposes; and will betray those who trust them, when they can get any advantage. Yet the Lord serves his own designs, even by those who are thus actuated by revenge, ambition, or lust; but as they intend not to honor him, in the end they will be thrown aside with contempt.

From the Epistles of the New Testament
2 Corinthians 10:7-11
Paul’s Bodily Presence is Weak
10:7 You are judging by appearances. If anyone is confident that they belong to Christ, they should consider again that we belong to Christ just as much as they do. 8 So even if I boast somewhat freely about the authority the Lord gave us for building you up rather than tearing you down, I will not be ashamed of it. 9 I do not want to seem to be trying to frighten you with my letters. 10 For some say, “His letters are weighty and forceful, but in person he is unimpressive and his speaking amounts to nothing.” 11 Such people should realize that what we are in our letters when we are absent, we will be in our actions when we are present.

Commentary
In outward appearance, Paul was mean and despised in the eyes of some, but this was a false rule to judge by. We must not think that none outward appearance, as if the want of such things proved a man not to be a real Christian, or an able, faithful minister of the lowly Savior.