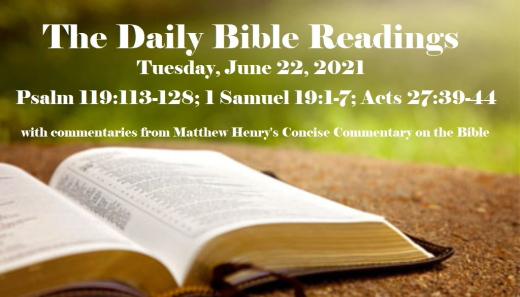 Nothing is outside the purview of God’s watch and keep. The duration of this promise makes this apparent: The Lord watches over his people now and forevermore. When the psalmist wrote that they would be kept from all harm, he did not contradict those passages that refer to the persecution that follows those who follow the Lord (Jn 15:20). Instead, the Lord protects his people in the midst of difficulty. Jesus prayed along these lines in his high priestly prayer: “Holy Father, protect them by the power of your name” (Jn 17:11). Followers of Christ will not be kept from difficulty, but they will be kept.

Today’s Lectionary Readings:
From the Psalter
Psalm 119:113-128
Do Not Leave Me to my Oppressors
113 I hate double-minded people,
but I love your law.
114 You are my refuge and my shield;
I have put my hope in your word.
115 Away from me, you evildoers,
that I may keep the commands of my God!
116 Sustain me, my God, according to your promise, and I will live;
do not let my hopes be dashed.
117 Uphold me, and I will be delivered;
I will always have regard for your decrees.
118 You reject all who stray from your decrees,
for their delusions come to nothing.
119 All the wicked of the earth you discard like dross;
therefore I love your statutes.
120 My flesh trembles in fear of you;
I stand in awe of your laws.

121 I have done what is righteous and just;
do not leave me to my oppressors.
122 Ensure your servant’s well-being;
do not let the arrogant oppress me.
123 My eyes fail, looking for your salvation,
looking for your righteous promise.
124 Deal with your servant according to your love
and teach me your decrees.
125 I am your servant; give me discernment
that I may understand your statutes.
126 It is time for you to act, Lord;
your law is being broken.
127 Because I love your commands
more than gold, more than pure gold,
128 and because I consider all your precepts right,
I hate every wrong path.

Commentary
The settling of God's word in heaven, is opposed to the changes and revolutions of the earth. And the engagements of God's covenant are established more firmly than the earth itself. All the creatures answer the ends of their creation: shall man, who alone is endued with reason, be the only unprofitable burden of the earth? We may make the Bible a pleasant companion at any time. But the word, without the grace of God, would not quicken us. See the best help for bad memories, namely, good affections; and though the exact words be lost, if the meaning remain, that is well. I am thine, not my own, not the world's; save me from sin, save me from ruin. The Lord will keep the man in peace, whose mind is stayed on him. It is poor perfection which one sees and end of. Such are all things in this world, which pass for perfections. The glory of man is but as the flower of the grass. The psalmist had seen the fullness of the word of God, and its sufficiency. The word of the Lord reaches to all cases, to all times. It will take us from all confidence in man, or in our own wisdom, strength, and righteousness. Thus shall we seek comfort and happiness from Christ alone.

From the Historical books of the Old Testament
1 Samuel 19:1-7
Saul Plots David’s Death
19:1 Saul told his son Jonathan and all the attendants to kill David. But Jonathan had taken a great liking to David 2 and warned him, “My father Saul is looking for a chance to kill you. Be on your guard tomorrow morning; go into hiding and stay there. 3 I will go out and stand with my father in the field where you are. I’ll speak to him about you and will tell you what I find out.”

4 Jonathan spoke well of David to Saul his father and said to him, “Let not the king do wrong to his servant David; he has not wronged you, and what he has done has benefited you greatly. 5 He took his life in his hands when he killed the Philistine. The Lord won a great victory for all Israel, and you saw it and were glad. Why then would you do wrong to an innocent man like David by killing him for no reason?”

6 Saul listened to Jonathan and took this oath: “As surely as the Lord lives, David will not be put to death.”

7 So Jonathan called David and told him the whole conversation. He brought him to Saul, and David was with Saul as before.

Commentary
How forcible are right words! Saul was, for a time, convinced of the unreasonableness of his enmity to David; but he continued his malice against David. So incurable is the hatred of the seed of the serpent against that of the woman; so deceitful and desperately wicked is the heart of man without the grace of God, Jeremiah 17:9.

From the Book of Acts
Acts 27:39-44
Safe Arrival on Land
27:39 When daylight came, they did not recognize the land, but they saw a bay with a sandy beach, where they decided to run the ship aground if they could. 40 Cutting loose the anchors, they left them in the sea and at the same time untied the ropes that held the rudders. Then they hoisted the foresail to the wind and made for the beach. 41 But the ship struck a sandbar and ran aground. The bow stuck fast and would not move, and the stern was broken to pieces by the pounding of the surf.

42 The soldiers planned to kill the prisoners to prevent any of them from swimming away and escaping. 43 But the centurion wanted to spare Paul’s life and kept them from carrying out their plan. He ordered those who could swim to jump overboard first and get to land. 44 The rest were to get there on planks or on other pieces of the ship. In this way everyone reached land safely.

Commentary
The ship that had weathered the storm in the open sea, where it had room, is dashed to pieces when it sticks fast. Thus, if the heart fixes in the world in affection, and cleaving to it, it is lost. Satan's temptations beat against it, and it is gone; but as long as it keeps above the world, though tossed with cares and tumults, there is hope for it. They had the shore in view, yet suffered shipwreck in the harbor; thus we are taught never to be secure. Though there is great difficulty in the way of the promised salvation, it shall, without fail, be brought to pass. It will come to pass that whatever the trials and dangers may be, in due time all believers will get safely to heaven. Lord Jesus, thou hast assured us that none of thine shall perish. Thou wilt bring them all safe to the heavenly shore. And what a pleasing landing will that be! Thou wilt present them to thy Father, and give thy Holy Spirit full possession of them for ever.