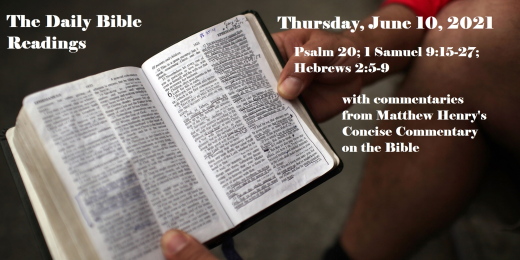 From the Historical books of the Old Testament
1 Samuel 9:15-27
Saul Meets Samuel
9:15 Now the day before Saul came, the Lord had revealed this to Samuel: 16 “About this time tomorrow I will send you a man from the land of Benjamin. Anoint him ruler over my people Israel; he will deliver them from the hand of the Philistines. I have looked on my people, for their cry has reached me.”

17 When Samuel caught sight of Saul, the Lord said to him, “This is the man I spoke to you about; he will govern my people.”

18 Saul approached Samuel in the gateway and asked, “Would you please tell me where the seer’s house is?”

19 “I am the seer,” Samuel replied. “Go up ahead of me to the high place, for today you are to eat with me, and in the morning I will send you on your way and will tell you all that is in your heart. 20 As for the donkeys you lost three days ago, do not worry about them; they have been found. And to whom is all the desire of Israel turned, if not to you and your whole family line?”

21 Saul answered, “But am I not a Benjamite, from the smallest tribe of Israel, and is not my clan the least of all the clans of the tribe of Benjamin? Why do you say such a thing to me?”

22 Then Samuel brought Saul and his servant into the hall and seated them at the head of those who were invited—about thirty in number. 23 Samuel said to the cook, “Bring the piece of meat I gave you, the one I told you to lay aside.”

24 So the cook took up the thigh with what was on it and set it in front of Saul. Samuel said, “Here is what has been kept for you. Eat, because it was set aside for you for this occasion from the time I said, ‘I have invited guests.’” And Saul dined with Samuel that day.

25 After they came down from the high place to the town, Samuel talked with Saul on the roof of his house. 26 They rose about daybreak, and Samuel called to Saul on the roof, “Get ready, and I will send you on your way.” When Saul got ready, he and Samuel went outside together. 27 As they were going down to the edge of the town, Samuel said to Saul, “Tell the servant to go on ahead of us”—and the servant did so—“but you stay here for a while, so that I may give you a message from God.”

Commentary
Verses 15-17 — Though God had, in displeasure, granted Israel's request for a king, yet he sends them a man to be captain over them, to save them out of the hand of the Philistines. He does it, listening graciously to their cry.

Verses 18-27 — Samuel, that good prophet, was so far from envying Saul, or bearing him any ill-will, that he was the first and most forward to do him honor. Both that evening and early the next morning, Samuel communed with Saul upon the flat roof of the house. We may suppose Samuel now convinced Saul that he was the person God had fixed upon for the government, and of his own willingness to resign. How different are the purposes of the Lord for us, from our intentions for ourselves! Perhaps Saul was the only one who ever went out to seek asses, and literally found a kingdom; but many have set out and moved their dwellings to seek riches and pleasures, who have been guided to places where they found salvation for their souls. Thus they have met with those who addressed them as if aware of the secrets of their lives and hearts, and have been led seriously to regard the word of the Lord. If this has been our case, though our worldly plans have not prospered, let us not care for that; the Lord has given us, or has prepared us for, what is far better.

From the Epistle to the Hebrews
Hebrews 2:5-9
Christ Tastes Death for Everyone
2:5 It is not to angels that he has subjected the world to come, about which we are speaking. 6 But there is a place where someone has testified:

“What is mankind that you are mindful of them,
a son of man that you care for him?
7 You made them a little lower than the angels;
you crowned them with glory and honor
8    and put everything under their feet.”

In putting everything under them, God left nothing that is not subject to them. Yet at present we do not see everything subject to them. 9 But we do see Jesus, who was made lower than the angels for a little while, now crowned with glory and honor because he suffered death, so that by the grace of God he might taste death for everyone.

Commentary
Neither the state in which the church is at present, nor its more completely restored state, when the prince of this world shall be cast out, and the kingdoms of the earth become the kingdom of Christ, is left to the government of the angels: Christ will take to him his great power, and will reign. And what is the moving cause of all the kindness God shows to men in giving Christ for them and to them? it is the grace of God. As a reward of Christ's humiliation in suffering death, he has unlimited dominion over all things; thus this ancient scripture was fulfilled in him. Thus God has done wonderful things for us in creation and providence, but for these we have made the basest returns.