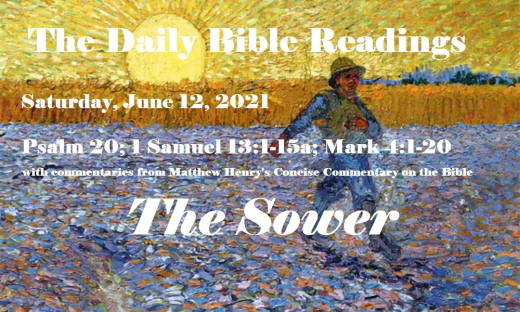 The heavens declare the glory of God; the skies proclaim the work of his hands. Day after day they pour forth speech; night after night they reveal knowledge.

Life Lessons: Go outside on a clear night and stare up into the sky for several minutes. Soak in the grandeur, majesty, and vastness of the starry host—and then think, My God made all this.

From the Historical books of the Old Testament
1 Samuel 13:1-15a
Saul Disobeys God
13:1 Saul was thirty years old when he became king, and he reigned over Israel forty- two years.

5 The Philistines assembled to fight Israel, with three thousand chariots, six thousand charioteers, and soldiers as numerous as the sand on the seashore. They went up and camped at Mikmash, east of Beth Aven. 6 When the Israelites saw that their situation was critical and that their army was hard pressed, they hid in caves and thickets, among the rocks, and in pits and cisterns. 7 Some Hebrews even crossed the Jordan to the land of Gad and Gilead.

Saul remained at Gilgal, and all the troops with him were quaking with fear. 8 He waited seven days, the time set by Samuel; but Samuel did not come to Gilgal, and Saul’s men began to scatter. 9 So he said, “Bring me the burnt offering and the fellowship offerings.” And Saul offered up the burnt offering. 10 Just as he finished making the offering, Samuel arrived, and Saul went out to greet him.

Saul replied, “When I saw that the men were scattering, and that you did not come at the set time, and that the Philistines were assembling at Mikmash, 12 I thought, ‘Now the Philistines will come down against me at Gilgal, and I have not sought the Lord’s favor.’ So I felt compelled to offer the burnt offering.”

15a Then Samuel left Gilgal and went up to Gibeah in Benjamin, and Saul counted the men who were with him.

Commentary
Verses 1-7 — Saul reigned one year, and nothing particular happened; but in his second year the events recorded in this chapter took place. For above a year he gave the Philistine time to prepare for war, and to weaken and to disarm the Israelites. When men are lifted up in self-sufficiency, they are often led into folly. The chief advantages of the enemies of the church are derived from the misconduct of its professed friends. When Saul at length sounded an alarm, the people, dissatisfied with his management, or terrified by the power of the enemy, did not come to him, or speedily deserted him.

Verses 8-15 — Saul broke the order expressly given by Samuel, see ch. 1 Samuel 10:8, as to what should be done in cases of extremity. Saul offered sacrifice without Samuel, and did it himself, though he was neither priest nor prophet. When charged with disobedience, he justified himself in what he had done, and gave no sign of repentance for it. He would have this act of disobedience pass for an instance of his prudence, and as a proof of his piety. Men destitute of inward piety, often lay great stress on the outward performances of religion. Samuel charges Saul with being an enemy to himself. Those that disobey the commandments of God, do foolishly for themselves. Sin is folly, and the greatest sinners are the greatest fools. Our disposition to obey or disobey God, will often be proved by our behavior in things which appear small. Men see nothing but Saul's outward act, which seems small; but God saw that he did this with unbelief and distrust of his providence, with contempt of his authority and justice, and with rebellion against the light of his own conscience. Blessed Savior, may we never, like Saul, bring our poor offerings, or fancied peace-offerings, without looking to thy precious, thy all-sufficient sacrifice! Thou only, O Lord, canst make, or hast made, our peace in the blood of the cross.

From the Gospel of Mark
Mark 4:1-20
The Parable of the Sower
4:1 Again Jesus began to teach by the lake. The crowd that gathered around him was so large that he got into a boat and sat in it out on the lake, while all the people were along the shore at the water’s edge. 2 He taught them many things by parables, and in his teaching said: 3 “Listen! A farmer went out to sow his seed. 4 As he was scattering the seed, some fell along the path, and the birds came and ate it up. 5 Some fell on rocky places, where it did not have much soil. It sprang up quickly, because the soil was shallow. 6 But when the sun came up, the plants were scorched, and they withered because they had no root. 7 Other seed fell among thorns, which grew up and choked the plants, so that they did not bear grain. 8 Still other seed fell on good soil. It came up, grew and produced a crop, some multiplying thirty, some sixty, some a hundred times.”

9 Then Jesus said, “Whoever has ears to hear, let them hear.”

10 When he was alone, the Twelve and the others around him asked him about the parables. 11 He told them, “The secret of the kingdom of God has been given to you. But to those on the outside everything is said in parables 12 so that,

“‘they may be ever seeing but never perceiving,
and ever hearing but never understanding;
otherwise they might turn and be forgiven!’”

13 Then Jesus said to them, “Don’t you understand this parable? How then will you understand any parable? 14 The farmer sows the word. 15 Some people are like seed along the path, where the word is sown. As soon as they hear it, Satan comes and takes away the word that was sown in them. 16 Others, like seed sown on rocky places, hear the word and at once receive it with joy. 17 But since they have no root, they last only a short time. When trouble or persecution comes because of the word, they quickly fall away. 18 Still others, like seed sown among thorns, hear the word; 19 but the worries of this life, the deceitfulness of wealth and the desires for other things come in and choke the word, making it unfruitful. 20 Others, like seed sown on good soil, hear the word, accept it, and produce a crop—some thirty, some sixty, some a hundred times what was sown.”

Commentary
This parable contained instruction so important, that all capable of hearing were bound to attend to it. There are many things we are concerned to know; and if we understand not the plain truths of the gospel, how shall we learn those more difficult! It will help us to value the privileges we enjoy as disciples of Christ, if we seriously consider the deplorable state of all who have not such privileges. In the great field of the church, the word of God is dispensed to all. Of the many that hear the word of the gospel, but few receive it, so as to bring forth fruit. Many are much affected with the word for the present, who yet receive no abiding benefit. The word does not leave abiding impressions upon the minds of men, because their hearts are not duly disposed to receive it. The devil is very busy about careless hearers, as the fowls of the air go about the seed that lies above ground. Many continue in a barren, false profession, and go down to hell. Impressions that are not deep, will not last. Many do not mind heart-work, without which religion is nothing. Others are hindered from profiting by the word of God, by abundance of the world. And those who have but little of the world, may yet be ruined by indulging the body. God expects and requires fruit from those who enjoy the gospel, a temper of mind and Christian graces daily exercised, Christian duties duly performed. Let us look to the Lord, that by his new-creating grace our hearts may become good ground, and that the good seed of the word may produce in our lives those good words and works which are through Jesus Christ, to the praise and glory of God the Father.