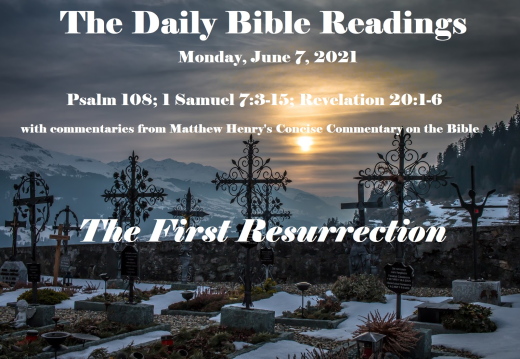 Before the mountains were born or you brought forth the whole world, from everlasting to everlasting you are God… A thousand years in your sight are like a day that has just gone by, or like a watch in the night.

Life Lessons: Because God is infinite and lives forever (Is. 57:15), He is not bound by the same constraints of time that limit and frustrate us. What seems like a delay to us is right on schedule to Him.

Today’s Lectionary Readings:
From the Psalter
Psalm 108
I Will Sing Praises Among the Nations
1 My heart, O God, is steadfast;
I will sing and make music with all my soul.
2 Awake, harp and lyre!
I will awaken the dawn.
3 I will praise you, Lord, among the nations;
I will sing of you among the peoples.
4 For great is your love, higher than the heavens;
your faithfulness reaches to the skies.
5 Be exalted, O God, above the heavens;
let your glory be over all the earth.

6 Save us and help us with your right hand,
that those you love may be delivered.
7 God has spoken from his sanctuary:
“In triumph I will parcel out Shechem
and measure off the Valley of Sukkoth.
8 Gilead is mine, Manasseh is mine;
Ephraim is my helmet,
Judah is my scepter.
9 Moab is my washbasin,
on Edom I toss my sandal;
over Philistia I shout in triumph.”

10 Who will bring me to the fortified city?
Who will lead me to Edom?
11 Is it not you, God, you who have rejected us
and no longer go out with our armies?
12 Give us aid against the enemy,
for human help is worthless.
13 With God we will gain the victory,
and he will trample down our enemies.

Commentary
Verses 1-5 —  It is the unspeakable comfort of all believers, that whoever is against them, God is for them; and to him they may apply as to one pleased to concern himself for them. David's enemies laughed at him for his devotion, but they could not laugh him out of it.

Verses 6-13 — The Lord Jesus may speak here as a Judge, denouncing sentence on some of his enemies, to warn others. When men reject the salvation of Christ, even their prayers are numbered among their sins. See what hurries some to shameful deaths, and brings the families and estates of others to ruin; makes them and theirs despicable and hateful, and brings poverty, shame, and misery upon their posterity: it is sin, that mischievous, destructive thing. And what will be the effect of the sentence, "Go, ye cursed," upon the bodies and souls of the wicked! How it will affect the senses of the body, and the powers of the soul, with pain, anguish, horror, and despair! Think on these things, sinners, tremble and repent.

From the Historical books of the Old Testament
1 Samuel 7:3-15
The People Turn Back to God
7:3 So Samuel said to all the Israelites, “If you are returning to the Lord with all your hearts, then rid yourselves of the foreign gods and the Ashtoreths and commit yourselves to the Lord and serve him only, and he will deliver you out of the hand of the Philistines.” 4 So the Israelites put away their Baals and Ashtoreths, and served the Lord only.

5 Then Samuel said, “Assemble all Israel at Mizpah, and I will intercede with the Lord for you.” 6 When they had assembled at Mizpah, they drew water and poured it out before the Lord. On that day they fasted and there they confessed, “We have sinned against the Lord.” Now Samuel was serving as leader of Israel at Mizpah.

10 While Samuel was sacrificing the burnt offering, the Philistines drew near to engage Israel in battle. But that day the Lord thundered with loud thunder against the Philistines and threw them into such a panic that they were routed before the Israelites. 11 The men of Israel rushed out of Mizpah and pursued the Philistines, slaughtering them along the way to a point below Beth Kar.

12 Then Samuel took a stone and set it up between Mizpah and Shen. He named it Ebenezer, saying, “Thus far the Lord has helped us.”

13 So the Philistines were subdued and they stopped invading Israel’s territory. Throughout Samuel’s lifetime, the hand of the Lord was against the Philistines. 14 The towns from Ekron to Gath that the Philistines had captured from Israel were restored to Israel, and Israel delivered the neighboring territory from the hands of the Philistines. And there was peace between Israel and the Amorites.

15 Samuel continued as Israel’s leader all the days of his life.

Commentary
Verses 3-4 — Twenty years passed before the house of Israel cared for the want of the ark. During this time the prophet Samuel labored to revive true religion. The few words used are very expressive; and this was one of the most effectual revivals of religion which ever took place in Israel.

Verses 5-6 — Israel drew water and poured it out before the Lord; signifying their humiliation and sorrow for sin. They pour out their hearts in repentance before the Lord. They were free and full in their confession, and fixed in their resolution to cast away from them all their wrong doings. They made a public confession, We have sinned against the Lord; thus giving glory to God, and taking shame to themselves. And if we thus confess our sins, we shall find our God faithful and just to forgive us our sins.

Verses 7-12 — The Philistines invaded Israel. When sinners begin to repent and reform, they must expect that Satan will muster all his force against them, and set his instruments at work to the utmost, to oppose and discourage them. The Israelites earnestly beg Samuel to pray for them. Oh what a comfort it is to all believers, that our great Intercessor above never ceases, is never silent! for he always appears in the presence of God for us. Samuel's sacrifice, without his prayer, had been an empty shadow. God gave a gracious answer. And Samuel erected a memorial of this victory, to the glory of God, and to encourage Israel. Through successive generations, the church of God has had cause to set up Ebenezers for renewed deliverances; neither outward persecutions nor inward corruptions have prevailed against her, because "hitherto the Lord hath helped her:" and he will help, even to the end of the world.

Verses 13-15 — In this great revival of true religion, the ark was neither removed to Shiloh, nor placed with the tabernacle any where else. This disregard to the Levitical institutions showed that their typical meaning formed their chief use; and when that was overlooked, they became a lifeless service, not to be compared with repentance, faith, and the love of God and man.

From the Apocalypse of John
Revelation 20:1-6
The First Resurrection
20:1 And I saw an angel coming down out of heaven, having the key to the Abyss and holding in his hand a great chain. 2 He seized the dragon, that ancient serpent, who is the devil, or Satan, and bound him for a thousand years. 3 He threw him into the Abyss, and locked and sealed it over him, to keep him from deceiving the nations anymore until the thousand years were ended. After that, he must be set free for a short time.

4 I saw thrones on which were seated those who had been given authority to judge. And I saw the souls of those who had been beheaded because of their testimony about Jesus and because of the word of God. They had not worshiped the beast or its image and had not received its mark on their foreheads or their hands. They came to life and reigned with Christ a thousand years. 5 (The rest of the dead did not come to life until the thousand years were ended.) This is the first resurrection. 6 Blessed and holy are those who share in the first resurrection. The second death has no power over them, but they will be priests of God and of Christ and will reign with him for a thousand years.

Commentary
Verses 1-3 — Here is a vision, showing by a figure the restraints laid on Satan himself. Christ, with Almighty power, will keep the devil from deceiving mankind as he has hitherto done. He never wants power and instruments to break the power of Satan. Christ shuts by his power, and seals by his authority. The church shall have a time of peace and prosperity, but all her trials are not yet over.

Verses 4-6 — Here is an account of the reign of the saints, for the same space of time as Satan is bound. Those who suffer with Christ, shall reign with him in his spiritual and heavenly kingdom, in conformity to him in his wisdom, righteousness, and holiness: this is called the first resurrection, with which none but those who serve Christ, and suffer for him, shall be favored. The happiness of these servants of God is declared. None can be blessed but those that are holy; and all that are holy shall be blessed. We know something thing of what the first death is, and it is very awful; but we know not what this second death is. It must be much more dreadful; it is the death of the soul, eternal separation from God. May we never know what it is: those who have been made partakers of a spiritual resurrection, are saved from the power of the second death. We may expect that a thousand years will follow the destruction of the antichristian, idolatrous, persecuting powers, during which pure Christianity, in doctrine, worship, and holiness, will be made known over all the earth. By the all-powerful working of the Holy Spirit, fallen man will be new-created; and faith and holiness will as certainly prevail, as unbelief and unholiness now do. We may easily perceive what a variety of dreadful pains, diseases, and other calamities would cease, if all men were true and consistent Christians. All the evils of public and private contests would be ended, and happiness of every kind largely increased. Every man would try to lighten suffering, instead of adding to the sorrows around him. It is our duty to pray for the promised glorious days, and to do every thing in our public and private stations which can prepare for them.