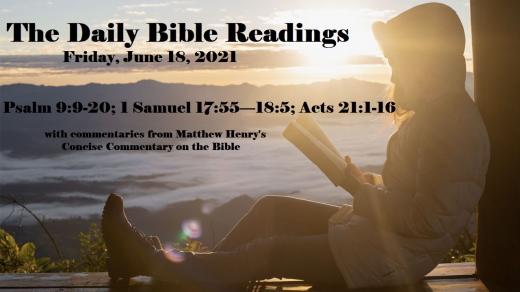 Fathers, do not exasperate your children; instead, bring them up in the training and instruction of the Lord.

Life Lessons: Parents must always be mindful to raise their children to love and respect the Lord (Prov. 22:6; Eph. 6:4; Col. 3:21). As Jesus said, “Let the children alone, and do not hinder them from coming to Me; for the kingdom of heaven belongs to such as these” (Matt. 19:14).

Today’s Lectionary Readings:
From the Psalter
Psalm 9:9-20
Refuge in Time of Trouble
9 The Lord is a refuge for the oppressed,
a stronghold in times of trouble.
10 Those who know your name trust in you,
for you, Lord, have never forsaken those who seek you.

11 Sing the praises of the Lord, enthroned in Zion;
proclaim among the nations what he has done.
12 For he who avenges blood remembers;
he does not ignore the cries of the afflicted.

13 Lord, see how my enemies persecute me!
Have mercy and lift me up from the gates of death,
14 that I may declare your praises
in the gates of Daughter Zion,
and there rejoice in your salvation.

15 The nations have fallen into the pit they have dug;
their feet are caught in the net they have hidden.
16 The Lord is known by his acts of justice;
the wicked are ensnared by the work of their hands.
17 The wicked go down to the realm of the dead,
all the nations that forget God.
18 But God will never forget the needy;
the hope of the afflicted will never perish.

Commentary
His people may, by faith, flee to him as their Refuge, and may depend on his power and promise for their safety, so that no real hurt shall be done to them. Those who know him to be a God of truth and faithfulness, will rejoice in his word of promise, and rest upon that. Those who know him to be an everlasting Father, will trust him with their souls as their main care, and trust in him at all times, even to the end; and by constant care seek to approve themselves to him in the whole course of their lives. Who is there that would not seek him, who never hath forsaken those that seek Him? Those who believe that God is greatly to be praised, not only desire to praise him better themselves, but desire that others may join with them. There is a day coming, when it will appear that he has not forgotten the cry of the humble; neither the cry of their blood, or the cry of their prayers. We are never brought so low, so near to death, but God can raise us up. If he has saved us from spiritual and eternal death, we may thence hope, that in all our distresses he will be a very present help to us. The overruling providence of God frequently so orders it, that persecutors and oppressors are brought to ruin by the projects they formed to destroy the people of God. Drunkards kill themselves; prodigals beggar themselves; the contentious bring mischief upon themselves: thus men's sins may be read in their punishment, and it becomes plain to all, that the destruction of sinners is of themselves. All wickedness came originally with the wicked one from hell; and those who continue in sin, must go to that place of torment. The true state, both of nations and of individuals, may be correctly estimated by this one rule, whether in their doings they remember or forget God. David encourages the people of God to wait for his salvation, though it should be long deferred. God will make it appear that he never did forget them: it is not possible he should. Strange that man, dust in his and about him, should yet need some sharp affliction, some severe visitation from God, to bring him to the knowledge of himself, and make him feel who and what he is.

From the Historical books of the Old Testament
1 Samuel 17:55—18:5
David Becomes One of Saul’s Officers
17:55 As Saul watched David going out to meet the Philistine, he said to Abner, commander of the army, “Abner, whose son is that young man?”

Abner replied, “As surely as you live, Your Majesty, I don’t know.”

56 The king said, “Find out whose son this young man is.”

David said, “I am the son of your servant Jesse of Bethlehem.”

18:1 After David had finished talking with Saul, Jonathan became one in spirit with David, and he loved him as himself. 2 From that day Saul kept David with him and did not let him return home to his family. 3 And Jonathan made a covenant with David because he loved him as himself. 4 Jonathan took off the robe he was wearing and gave it to David, along with his tunic, and even his sword, his bow and his belt.

5 Whatever mission Saul sent him on, David was so successful that Saul gave him a high rank in the army. This pleased all the troops, and Saul’s officers as well.

Commentary
Verses 17:55-58 — Let not the strong man glory in his strength, nor the armed man in his armor. God resists the proud, and pours contempt on those who defy him and his people. No one ever hardened his heart against God and prospered. The history is recorded, that all may exert themselves for the honor of God, and the support of his cause, with bold and unshaken reliance on him. There is one conflict in which all the followers of the Lamb are, and must be engaged; one enemy, more formidable than Goliath, still challenges the armies of Israel. But "resist the devil, and he will flee from you." Go forth to battle with the faith of David, and the powers of darkness shall not stand against you. But how often is the Christian foiled through an evil heart of unbelief!

Verses 18:1-5 — The friendship of David and Jonathan was the effect of Divine grace, which produces in true believers one heart and one soul, and causes them to love each other. This union of souls is from partaking in the Spirit of Christ. Where God unites hearts, carnal matters are too weak to separate them. Those who love Christ as their own souls, will be willing to join themselves to him in an everlasting covenant. It was certainly a great proof of the power of God's grace in David, that he was able to bear all this respect and honor, without being lifted up above measure.

From the Book of Acts
Acts 21:1-16
Paul is Warned About Future Persecution
21:1 After we had torn ourselves away from them, we put out to sea and sailed straight to Kos. The next day we went to Rhodes and from there to Patara. 2 We found a ship crossing over to Phoenicia, went on board and set sail. 3 After sighting Cyprus and passing to the south of it, we sailed on to Syria. We landed at Tyre, where our ship was to unload its cargo. 4 We sought out the disciples there and stayed with them seven days. Through the Spirit they urged Paul not to go on to Jerusalem. 5 When it was time to leave, we left and continued on our way. All of them, including wives and children, accompanied us out of the city, and there on the beach we knelt to pray. 6 After saying goodbye to each other, we went aboard the ship, and they returned home.

7 We continued our voyage from Tyre and landed at Ptolemais, where we greeted the brothers and sisters and stayed with them for a day. 8 Leaving the next day, we reached Caesarea and stayed at the house of Philip the evangelist, one of the Seven. 9 He had four unmarried daughters who prophesied.

10 After we had been there a number of days, a prophet named Agabus came down from Judea. 11 Coming over to us, he took Paul’s belt, tied his own hands and feet with it and said, “The Holy Spirit says, ‘In this way the Jewish leaders in Jerusalem will bind the owner of this belt and will hand him over to the Gentiles.’”

12 When we heard this, we and the people there pleaded with Paul not to go up to Jerusalem. 13 Then Paul answered, “Why are you weeping and breaking my heart? I am ready not only to be bound, but also to die in Jerusalem for the name of the Lord Jesus.” 14 When he would not be dissuaded, we gave up and said, “The Lord’s will be done.”

15 After this, we started on our way up to Jerusalem. 16 Some of the disciples from Caesarea accompanied us and brought us to the home of Mnason, where we were to stay. He was a man from Cyprus and one of the early disciples.

Commentary
Verses 1-7 — Providence must be acknowledged when our affairs go on well. Wherever Paul came, he inquired what disciples were there, and found them out. Foreseeing his troubles, from love to him, and concern for the church, they wrongly thought it would be most for the glory of God that he should continue at liberty; but their earnestness to dissuade him from it, renders his pious resolution the more illustrious. He has taught us by example, as well as by rule, to pray always, to pray without ceasing. Their last farewell was sweetened with prayer.

Verses 8-16 — Paul had express warning of his troubles, that when they came, they might be no surprise or terror to him. The general notice given us, that through much tribulation we must enter into the kingdom of God, should be of the same use to us. Their weeping began to weaken and slacken his resolution Has not our Master told us to take up our cross? It was a trouble to him, that they should so earnestly press him to do that in which he could not gratify them without wronging his conscience. When we see trouble coming, it becomes us to say, not only, The will of the Lord must be done, and there is no remedy; but, Let the will of the Lord be done; for his will is his wisdom, and he doeth all according to the counsel of it. When a trouble is come, this must allay our griefs, that the will of the Lord is done; when we see it coming, this must silence our fears, that the will of the Lord shall be done; and we ought to say, Amen, let it be done.