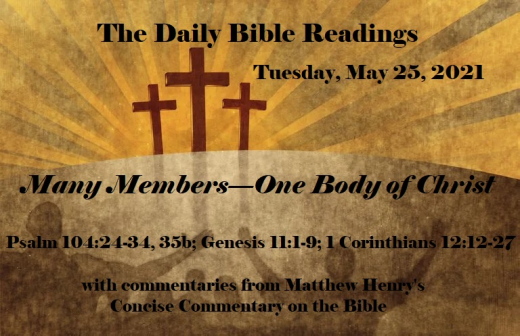 My dear brothers and sisters, take note of this: Everyone should be quick to listen, slow to speak and slow to become angry.

Study Note: Though the Christian community places high regard on the talent of eloquent speech, James places the accent on listening. It is the person who listens intently to the Word of truth who progresses in godliness.
Today’s Lectionary Readings:
From the Psalter
Psalm 104:24-34, 35b
Renewing the Face of the Earth
24 How many are your works, Lord!
In wisdom you made them all;
the earth is full of your creatures.
25 There is the sea, vast and spacious,
teeming with creatures beyond number—
living things both large and small.
26 There the ships go to and fro,
and Leviathan, which you formed to frolic there.

27 All creatures look to you
to give them their food at the proper time.
28 When you give it to them,
they gather it up;
when you open your hand,
they are satisfied with good things.
29 When you hide your face,
they are terrified;
when you take away their breath,
they die and return to the dust.
30 When you send your Spirit,
they are created,
and you renew the face of the ground.

31 May the glory of the Lord endure forever;
may the Lord rejoice in his works—
32 he who looks at the earth, and it trembles,
who touches the mountains, and they smoke.

33 I will sing to the Lord all my life;
I will sing praise to my God as long as I live.
34 May my meditation be pleasing to him,
as I rejoice in the Lord.

Commentary
Verses 24-30 — We are to praise and magnify God for the constant succession of day and night. And see how those are like to the wild beasts, who wait for the twilight, and have fellowship with the unfruitful works of darkness. Does God listen to the language of mere nature, even in ravenous creatures, and shall he not much more interpret favorably the language of grace in his own people, though weak and broken groanings which cannot be uttered? There is the work of every day, which is to be done in its day, which man must apply to every morning, and which he must continue in till evening; it will be time enough to rest when the night comes, in which no man can work. The psalmist wonders at the works of God. The works of art, the more closely they are looked upon, the more rough they appear; the works of nature appear more fine and exact. They are all made in wisdom, for they all answer the end they were designed to serve. Every spring is an emblem of the resurrection, when a new world rises, as it were, out of the ruins of the old one. But man alone lives beyond death. When the Lord takes away his breath, his soul enters on another state, and his body will be raised, either to glory or to misery. May the Lord send forth his Spirit, and new-create our souls to holiness.

Verses 31-35 — Man's glory is fading; God's glory is everlasting: creatures change, but with the Creator there is no variableness. And if mediation on the glories of creation be so sweet to the soul, what greater glory appears to the enlightened mind, when contemplating the great work of redemption! There alone can a sinner perceive ground of confidence and joy in God. While he with pleasure upholds all, governs all, and rejoices in all his works, let our souls, touched by his grace, meditate on and praise him.

A Reading from the Pentateuch
Genesis 11:1-9
The Fragmenting of Human Tongues
11:1 Now the whole world had one language and a common speech. 2 As people moved eastward, they found a plain in Shinar and settled there.

3 They said to each other, “Come, let’s make bricks and bake them thoroughly.” They used brick instead of stone, and tar for mortar. 4 Then they said, “Come, let us build ourselves a city, with a tower that reaches to the heavens, so that we may make a name for ourselves; otherwise we will be scattered over the face of the whole earth.”

5 But the Lord came down to see the city and the tower the people were building. 6 The Lord said, “If as one people speaking the same language they have begun to do this, then nothing they plan to do will be impossible for them. 7 Come, let us go down and confuse their language so they will not understand each other.”

Commentary
Verses 1-4 — How soon men forget the most tremendous judgments, and go back to their former crimes! Though the desolations of the deluge were before their eyes, though they sprang from the stock of righteous Noah, yet even during his life-time, wickedness increases exceedingly. Nothing but the sanctifying grace of the Holy Spirit can remove the sinful lusts of the human will, and the depravity of the human heart. God's purpose was, that mankind should form many nations, and people all lands. In contempt of the Divine will, and against the counsel of Noah, the bulk of mankind united to build a city and a tower to prevent their separating. Idolatry was begun, and Babel became one of its chief seats. They made one another more daring and resolute. Let us learn to provoke one another to love and to good works, as sinners stir up and encourage one another to wicked works.

Verses 5-9 — Here is an expression after the manner of men; The Lord came down to see the city. God is just and fair in all he does against sin and sinners, and condemns none unheard. Pious Eber is not found among this ungodly crew; for he and his are called the children of God; their souls joined not themselves to the assembly of these children of men. God suffered them to go on some way, that the works of their hands, from which they promised themselves lasting honor, might turn to their lasting reproach. God has wise and holy ends, in allowing the enemies of his glory to carry on their wicked projects a great way, and to prosper long. Observe the wisdom and mercy of God, in the methods taken for defeating this undertaking. And the mercy of God in not making the penalty equal to the offense; for he deals not with us according to our sins. The wisdom of God, in fixing upon a sure way to stop these proceedings. If they could not understand one another, they could not help one another; this would take them off from their building. God has various means, and effectual ones, to baffle and defeat the projects of proud men that set themselves against him, and particularly he divides them among themselves. Notwithstanding their union and obstinacy God was above them; for who ever hardened his heart against him, and prospered? Their language was confounded. We all suffer by it to this day: in all the pains and trouble used to learn the languages we have occasion for, we suffer for the rebellion of our ancestors at Babel. Nay, and those unhappy disputes, which are strifes of words, and arise from misunderstanding one another's words, for aught we know, are owing to this confusion of tongues. They left off to build the city. The confusion of their tongues not only unfitted them for helping one another, but they saw the hand of the Lord gone out against them. It is wisdom to leave off that which we see God fights against. God is able to blast and bring to nought all the devices and designs of Babel-builders: there is no wisdom nor counsel against the Lord. The builders departed according to their families, and the tongue they spake, to the countries and places allotted to them. The children of men never did, nor ever will, come all together again, till the great day, when the Son of man shall sit upon the throne of his glory, and all nations shall be gathered before him.

A Reading from Paul's First Epistle to the Corinthians
1 Corinthians 12:12-27
Many Members One Body of Christ
12:12 Just as a body, though one, has many parts, but all its many parts form one body, so it is with Christ. 13 For we were all baptized by one Spirit so as to form one body—whether Jews or Gentiles, slave or free—and we were all given the one Spirit to drink. 14 Even so the body is not made up of one part but of many.

21 The eye cannot say to the hand, “I don’t need you!” And the head cannot say to the feet, “I don’t need you!” 22 On the contrary, those parts of the body that seem to be weaker are indispensable, 23 and the parts that we think are less honorable we treat with special honor. And the parts that are unpresentable are treated with special modesty, 24 while our presentable parts need no special treatment. But God has put the body together, giving greater honor to the parts that lacked it, 25 so that there should be no division in the body, but that its parts should have equal concern for each other. 26 If one part suffers, every part suffers with it; if one part is honored, every part rejoices with it.

27 Now you are the body of Christ, and each one of you is a part of it.

Commentary
Christ and his church form one body, as Head and members. Christians become members of this body by baptism. The outward rite is of Divine institution; it is a sign of the new birth, and is called therefore the washing of regeneration, Titus 3:5. But it is by the Spirit, only by the renewing of the Holy Ghost, that we are made members of Christ's body. And by communion with Christ at the Lord's supper, we are strengthened, not by drinking the wine, but by drinking into one Spirit. Each member has its form, place, and use. The meanest makes a part of the body. There must be a distinction of members in the body. So Christ's members have different powers and different places. We should do the duties of our own place, and not murmur, or quarrel with others. All the members of the body are useful and necessary to each other. Nor is there a member of the body of Christ, but may and ought to be useful to fellow-members. As in the natural body of man, the members should be closely united by the strongest bonds of love; the good of the whole should be the object of all. All Christians are dependent one upon another; each is to expect and receive help from the rest. Let us then have more of the spirit of union in our religion.