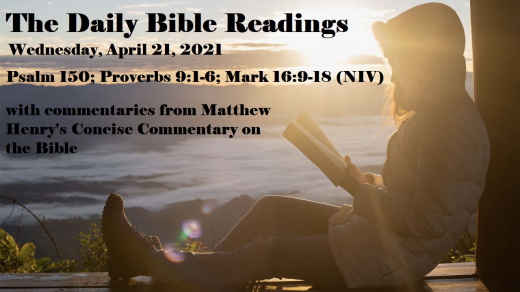 Today’s Readings:
A Reading from the Book of Psalms
Psalm 150
Praise to God
1 Praise the Lord.

Commentary
We are here stirred up to praise God. Praise God for his sanctuary, and the privileges we enjoy by having it among us; praise him because of his power and glory in the firmament. Those who praise the Lord in heaven, behold displays of his power and glory which we cannot now conceive. But the greatest of all his mighty acts is known in his earthly sanctuary. The holiness and the love of our God are more displayed in man's redemption, than in all his other works. Let us praise our God and Savior for it. We need not care to know what instruments of music are mentioned. Hereby is meant that in serving God we should spare no cost or pains. Praise God with strong faith; praise him with holy love and delight; praise him with entire confidence in Christ; praise him with believing triumph over the powers of darkness; praise him by universal respect to all his commands; praise him by cheerful submission to all his disposals; praise him by rejoicing in his love, and comforting ourselves in his goodness; praise him by promoting the interests of the kingdom of his grace; praise him by lively hope and expectation of the kingdom of his glory. Since we must shortly breathe our last, while we have breath let us praise the Lord; then we shall breathe our last with comfort. Let every thing that hath breath praise the Lord. Praise ye the Lord. Such is the very suitable end of a book inspired by the Spirit of God, written for the work of praise; a book which has supplied the songs of the church for more than three thousand years; a book which is quoted more frequently than any other by Christ and his apostles; a book which presents the loftiest ideas of God and his government, which is fitted to every state of human life, which sets forth every state of religious experience, and which bears simple and clear marks of its Divine origin.

A Reading from the Old Testament
Proverbs 9:1-6
Wisdom Invites to Her Feast
1 Wisdom has built her house;
she has set up its seven pillars.
2 She has prepared her meat and mixed her wine;
she has also set her table.
3 She has sent out her servants, and she calls
from the highest point of the city,
4    “Let all who are simple come to my house!”
To those who have no sense she says,
5    “Come, eat my food
and drink the wine I have mixed.
6 Leave your simple ways and you will live;
walk in the way of insight.”

Commentary
Christ has prepared ordinances to which his people are admitted, and by which nourishment is given here to those that believe in him, as well as mansions in heaven hereafter. The ministers of the gospel go forth to invite the guests. The call is general, and shuts out none that do not shut out themselves. Our Savior came, not to call the righteous, but sinners; not the wise in their own eyes, who say they see. We must keep from the company and foolish pleasures of the ungodly, or we never can enjoy the pleasures of a holy life. It is vain to seek the company of wicked men in the hope of doing them good; we are far more likely to be corrupted by them. It is not enough to forsake the foolish, we must join those that walk in wisdom. There is no true wisdom but in the way of religion, no true life but in the end of that way. Here is the happiness of those that embrace it. A man cannot be profitable to God; it is for our own good. Observe the shame and ruin of those who slight it. God is not the Author of sin: and Satan can only tempt, he cannot force. Thou shalt bear the loss of that which thou scornest: it will add to thy condemnation.

A Reading from the New Testament
Mark 16:9-18
Jesus appears to the disciples

[The earliest manuscripts and some other ancient witnesses do not have verses 9–20.]

16:9 When Jesus rose early on the first day of the week, he appeared first to Mary Magdalene, out of whom he had driven seven demons. 10 She went and told those who had been with him and who were mourning and weeping. 11 When they heard that Jesus was alive and that she had seen him, they did not believe it.

12 Afterward Jesus appeared in a different form to two of them while they were walking in the country. 13 These returned and reported it to the rest; but they did not believe them either.

14 Later Jesus appeared to the Eleven as they were eating; he rebuked them for their lack of faith and their stubborn refusal to believe those who had seen him after he had risen.

15 He said to them, “Go into all the world and preach the gospel to all creation. 16 Whoever believes and is baptized will be saved, but whoever does not believe will be condemned. 17 And these signs will accompany those who believe: In my name they will drive out demons; they will speak in new tongues; 18 they will pick up snakes with their hands; and when they drink deadly poison, it will not hurt them at all; they will place their hands on sick people, and they will get well.”

Commentary
Verses 9-13 — Better news cannot be brought to disciples in tears, than to tell them of Christ's resurrection. And we should study to comfort disciples that are mourners, by telling them whatever we have seen of Christ. It was a wise providence that the proofs of Christ's resurrection were given gradually, and admitted cautiously, that the assurance with which the apostles preached this doctrine afterwards might the more satisfy. Yet how slowly do we admit the consolations which the word of God holds forth! Therefore while Christ comforts his people, he often sees it needful to rebuke and correct them for hardness of heart in distrusting his promise, as well as in not obeying his holy precepts.

Verses 14-18 — The evidences of the truth of the gospel are so full, that those who receive it not, may justly be upbraided with their unbelief. Our blessed Lord renewed his choice of the eleven as his apostles, and commissioned them to go into all the world, to preach his gospel to every creature. Only he that is a true Christian shall be saved through Christ. Simon Magus professed to believe, and was baptized, yet he was declared to be in the bonds of iniquity: see his history in Acts 8:13-25. Doubtless this is a solemn declaration of that true faith which receives Christ in all his characters and offices, and for all the purposes of salvation, and which produces its right effect on the heart and life; not a mere assent, which is a dead faith, and cannot profit. The commission of Christ's ministers extends to every creature throughout the world, and the declarations of the gospel contain not only truths, encouragements, and precepts, but also most awful warnings. Observe what power the apostles should be endued with, for confirming the doctrine they were to preach. These were miracles to confirm the truth of the gospel, and means of spreading the gospel among nations that had not heard it.