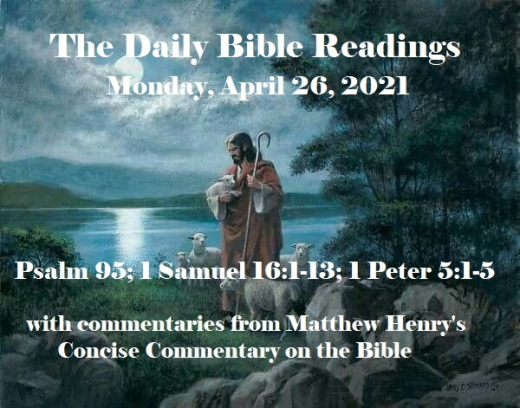 Therefore he is able to save completely those who come to God through him, because he always lives to intercede for them.

As the high priest went before God to make atonement for their sins, the Israelites always felt uncertain about whether he would succeed. Small bells on the hem of his garments indicated whether he had survived being in God’s holy presence. If the bells stopped ringing, the people knew that the priest had died, thus failing to make the acceptable sacrifice. Thankfully, there is never a question about whether we are accepted. Jesus Christ always represents us perfectly before the throne of God.

Today’s Readings:
A Reading from the Book of Psalms
Psalm 95
We Are the Sheep of God’s Hand
1 Come, let us sing for joy to the Lord;
let us shout aloud to the Rock of our salvation.
2 Let us come before him with thanksgiving
and extol him with music and song.

3 For the Lord is the great God,
the great King above all gods.
4 In his hand are the depths of the earth,
and the mountain peaks belong to him.
5 The sea is his, for he made it,
and his hands formed the dry land.

6 Come, let us bow down in worship,
let us kneel before the Lord our Maker;
7 for he is our God
and we are the people of his pasture,
the flock under his care.

Today, if only you would hear his voice,
8 “Do not harden your hearts as you did at Meribah,
as you did that day at Massah in the wilderness,
9 where your ancestors tested me;
they tried me, though they had seen what I did.
10 For forty years I was angry with that generation;
I said, ‘They are a people whose hearts go astray,
and they have not known my ways.’
11 So I declared on oath in my anger,
‘They shall never enter my rest.’”

Commentary
Verses 1-7 — Whenever we come into God's presence, we must come with thanksgiving. The Lord is to be praised; we do not want matter, it were well if we did not want a heart. How great is that God, whose the whole earth is, and the fullness thereof; who directs and disposes of all!, The Lord Jesus, whom we are here taught to praise, is a great God; the mighty God is one of his titles, and God over all, blessed for evermore. To him all power is given, both in heaven and earth. He is our God, and we should praise him. He is our Savior, and the Author of our blessedness. The gospel church is his flock, Christ is the great and good Shepherd of believers; he sought them when lost, and brought them to his fold.

Verses 7-11 — Christ calls upon his people to hear his voice. You call him Master, or Lord; then be his willing, obedient people. Hear the voice of his doctrine, of his law, and in both, of his Spirit: hear and heed; hear and yield. Christ's voice must be heard to-day. This day of opportunity will not last always; improve it while it is called to-day. Hearing the voice of Christ is the same with believing. Hardness of heart is at the bottom of all distrust of the Lord. The sins of others ought to be warnings to us not to tread in their steps. The murmurings of Israel were written for our admonition. God is not subject to such passions as we are; but he is very angry at sin and sinners. That certainly is evil, which deserves such a recompense; and his threatenings are as sure as his promises. Let us be aware of the evils of our hearts, which lead us to wander from the Lord. There is a rest ordained for believers, the rest of everlasting refreshment, begun in this life, and perfected in the life to come. This is the rest which God calls his rest.

A Reading from the Old Testament
1 Samuel 16:1-13
The Shepherd David is Anointed
16:1 The Lord said to Samuel, “How long will you mourn for Saul, since I have rejected him as king over Israel? Fill your horn with oil and be on your way; I am sending you to Jesse of Bethlehem. I have chosen one of his sons to be king.”

The Lord said, “Take a heifer with you and say, ‘I have come to sacrifice to the Lord.’ 3 Invite Jesse to the sacrifice, and I will show you what to do. You are to anoint for me the one I indicate.”

4 Samuel did what the Lord said. When he arrived at Bethlehem, the elders of the town trembled when they met him. They asked, “Do you come in peace?”

5 Samuel replied, “Yes, in peace; I have come to sacrifice to the Lord. Consecrate yourselves and come to the sacrifice with me.” Then he consecrated Jesse and his sons and invited them to the sacrifice.

6 When they arrived, Samuel saw Eliab and thought, “Surely the Lord’s anointed stands here before the Lord.”

“There is still the youngest,” Jesse answered. “He is tending the sheep.”

Samuel said, “Send for him; we will not sit down until he arrives.”

12 So he sent for him and had him brought in. He was glowing with health and had a fine appearance and handsome features.

Then the Lord said, “Rise and anoint him; this is the one.”

13 So Samuel took the horn of oil and anointed him in the presence of his brothers, and from that day on the Spirit of the Lord came powerfully upon David. Samuel then went to Ramah.

Commentary
Verses 1-5 — It appears that Saul was grown very wicked. Of what would he not be guilty, who durst think to kill Samuel? The elders of Bethlehem trembled at Samuel's coming. It becomes us to stand in awe of God's messengers, and to tremble at his word. His answer was, I come peaceably, for I come to sacrifice. When our Lord Jesus came into the world, though men had reason to fear that his errand was to condemn the world, yet he gave full assurance that he came peaceably, for he came to sacrifice, and he brought his offering with him; A body hast thou prepared me. Let us sanctify ourselves, and depend upon His sacrifice.

Verses 6-13 — It was strange that Samuel, who had been so disappointed in Saul, whose countenance and stature recommended him, should judge of another man by that rule. We can tell how men look, but God can tell what they are. He judges of men by the heart. We often form a mistaken judgment of characters; but the Lord values only the faith, fear, and love, which are planted in the heart, beyond human discernment. And God does not favor our children according to our fond partiality, but often most honors and blesses those who have been least regarded. David at length was pitched upon. He was the youngest of the sons of Jesse; his name signifies Beloved; he was a type of God's beloved Son. It should seem, David was least set by of all the sons of Jesse. But the Spirit of the Lord came upon David from that day forward. His anointing was not an empty ceremony, a Divine power went with that instituted sign; he found himself advanced in wisdom and courage, with all the qualifications of a prince, though not advanced in his outward circumstances. This would satisfy him that his election was of God. The best evidence of our being predestinated to the kingdom of glory, is, our being sealed with the Spirit of promise, and experience of a work of grace in our hearts.

A Reading from the New Testament
1 Peter 5:1-5
Christ the Great Shepherd
5:1 To the elders among you, I appeal as a fellow elder and a witness of Christ’s sufferings who also will share in the glory to be revealed: 2 Be shepherds of God’s flock that is under your care, watching over them—not because you must, but because you are willing, as God wants you to be; not pursuing dishonest gain, but eager to serve; 3 not lording it over those entrusted to you, but being examples to the flock. 4 And when the Chief Shepherd appears, you will receive the crown of glory that will never fade away.

5 In the same way, you who are younger, submit yourselves to your elders. All of you, clothe yourselves with humility toward one another, because,

“God opposes the proud
but shows favor to the humble.”

Commentary
The apostle Peter does not command, but exhorts. He does not claim power to rule over all pastors and churches. It was the peculiar honor of Peter and a few more, to be witnesses of Christ's sufferings; but it is the privilege of all true Christians to partake of the glory that shall be revealed. These poor, dispersed, suffering Christians, were the flock of God, redeemed to God by the great Shepherd, living in holy love and communion, according to the will of God. They are also dignified with the title of God's heritage or clergy; his peculiar lot, chosen for his own people, to enjoy his special favor, and to do him special service. Christ is the chief Shepherd of the whole flock and heritage of God. And all faithful ministers will receive a crown of unfading glory, infinitely better and more honorable than all the authority, wealth, and pleasure of the world.