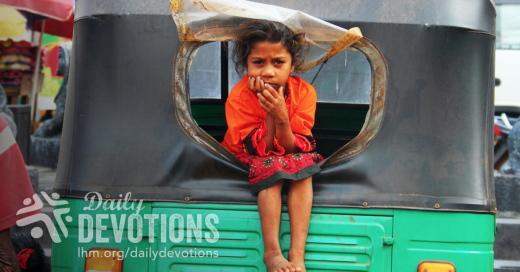 Images of God
Now Jesus did many other signs in the presence of the disciples, which are not written in this book; but these are written so that you may believe that Jesus is the Christ, the Son of God, and that by believing you may have life in His Name.
— John 20:30-31
"A picture is worth a thousand words."

On a mission trip to Thailand, my wife and I took over 8,000 pictures. Unfortunately, my favorite picture is one I never captured—at least not on film. It happened too quickly to get: three people on a scooter. I had seen it often: a mother was driving; a daughter was hanging on behind; and a younger child was riding in front.

What made this picture so special was the gleeful smile on the little girl's face. That smile said, "I don't have a care or worry in the world." It was priceless, but before I could raise my camera to get the shot, the scooter was gone. So I did the next best thing, I carefully committed it to memory.

I often thought that we need to do the same thing with God's Word.

The pages of the Bible roll out picture after picture of a loving God who brings forgiveness, life, and salvation to a sinful world. My favorite biblical image is of a blood-stained, empty cross in front of an open tomb. Jesus stands in front of that tomb, speaking to a woman. He says, "Go to My brothers and say to them, 'I am ascending to My Father and your Father, to My God and your God'" (John 20:17b).

The smile on His face says it all: "I'm alive! Sin and death are conquered. You are forgiven through faith in Me!"

Photographs increase in value when they communicate truth between the photographer and the viewer. This is true in respect to the girl's obvious joy on the scooter. It's also true for the much more significant picture that Scripture shows of God saving us from sin and death.

Indeed, the biblical images—the Spirit-inspired truths—found in God's Word are so powerful they create faith in the hearts of those touched by the Holy Spirit.

Of course, a person will never know or appreciate the love of God until he looks at the photo album of His Son Jesus. It is then, when looking at the images of God working in the Old and New Testaments, that he will see that God's picture book is a masterpiece, with a theme that stretches from cover to cover: God loved the world so much that He sent His Son Jesus to save it (see John 3:16).

Heavenly Father, create in us a longing to see You in Your Word, and to know the love with which You have loved us. In Jesus' Name. Amen.

1. Do you have a favorite photo you've taken? What is it, and why?

2. What do you think might be some of the other things Jesus did that the Gospel writers didn't include?

3. Do you have a particular visual image from Scripture you like to think about? What is it?

Use these devotions in your newsletter and bulletin! Used by permission; all rights reserved by the Int'l LLL (LHM).
"A picture is worth a thousand words."
Posted by Kenny at 1:06:00 AM