Ichthus Ministries Daily Devotions — Where Did It Fall? 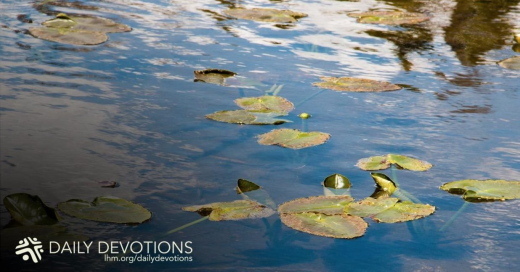 Where Did It Fall?

Now the sons of the prophets said to Elisha, "See, the place where we dwell under your charge is too small for us. Let us go to the Jordan and each of us get there a log, and let us make a place for us to dwell there." And he answered, "Go." Then one of them said, "Be pleased to go with your servants." And he answered, "I will go." So he went with them. And when they came to the Jordan, they cut down trees. But as one was felling a log, his axe head fell into the water, and he cried out, "Alas, my master! It was borrowed!" Then the man of God said, "Where did it fall?" When he showed him the place, he cut off a stick and threw it in there and made the iron float. And he said, "Take it up." So he reached out his hand and took it.
— 2 Kings 6:1-7

Rainy fall afternoons provide a delicious excuse for exploring the attic or some seldom-touched room in the basement. Tucked away in a far corner lie half-forgotten treasures guaranteed to evoke gales of laughter or daydreams of bittersweet remembrance.

Certain parts of Scripture often lie tucked away in a far corner of our memory. Scholars expound upon them less frequently. Pastors preach on them less often. Yet when dusted off and held to the light, they evoke an "Ah-ha!" kind of experience for us. We smile as we discover once again a forgotten facet of our Father's care.

One of my very favorite examples in this tradition is the account of Elisha and the building project found in 2 Kings 6:1-7. It seems the dormitory that had been housing the students studying under the prophet Elisha became too small. One of the scholars, realizing the rigors of a fund-raising campaign, suggested a do-it-yourself project.

Elisha concurred and the students began felling trees for lumber. As they worked, one poor soul apparently more suited to wielding a pencil than an axe, accidently dropped the tool in the nearby River Jordan. Horror gripped his heart at once. The axe was borrowed, and he was living on a student's income.

Elisha calmed him by asking simply, "Where did it fall?" Shown the place, the prophet threw a stick into the river. The student watched, certainly with very wide eyes, as the axe head popped to the surface and bobbed like a cork on the water to be snatched out of the river.

The lesson that day needed little explanation. God cares about the smallest things in our lives. He concerns Himself with the nitty-gritty details—the flat tire, the crabby boss, the burned meatloaf.

And it's not just the little things He's concerned about. In Jesus, the Father has taken care of all the details in our lives—the hurts we can't get past, the regrets that sting so sharply, and the sins we can't remove. Jesus has taken everything to the cross, conquered it there, and given us His victory (see 1 Corinthians 15:57). Knowing this, we know He is there for us—in everything.

So remember, when you need help with the details, He bends low to whisper softly, "Where did it fall? What is it you need? How can I help?"

Heavenly Father, thank You for Your watchful care. In Jesus' Name. Amen.

1. When has God acted in such a way to help or save you in a difficult circumstance?

2. Have you asked God for help before in a situation that seemed like it was impossible to fix?

3. Have you had a chance to let others know that Jesus is there for them when life gets rough?

Use these devotions in your newsletter and bulletin! Used by permission; all rights reserved by the Int'l LLL (LHM).
Rainy fall afternoons provide a delicious excuse for exploring the attic or some seldom-touched room in the basement.
Posted by Kenny at 1:06:00 AM