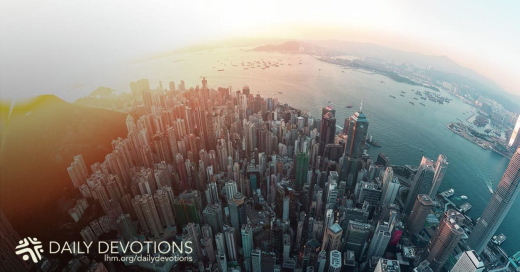 God Sits High, But Looks Low
As he (Peter) was saying these things, a cloud came and overshadowed them, and they were afraid as they entered the cloud. And a voice came out of the cloud, saying, "This is My Son, My Chosen One; listen to Him!"
— Luke 9:34-35
At this point in the transfiguration story (see Luke 9:28-36), God sits high, but looks low. Peter, James, and John saw the Son of God in all His glory, "glory as of the only Son from the Father," as John later described (John 1:14b). When Peter wanted to settle in and enjoy the glory by putting up three tents, his suggestion was ignored. Instead, a voice spoke from heaven. Then Moses and Elijah disappeared.

Then they saw only Jesus, looking as He had before the transfiguration, the glory no longer seen by their eyes but fixed in their memory for the rest of their lives. This Jesus, looking now like anyone else, led the three disciples down from the mountain to the plain, the lower places where people were living their daily lives. God sits high, but looks low. That's where Jesus still brings His salvation today, down here, where you and I live; where we are occupied with our daily business; where we sometimes rejoice but just as often where we are troubled and hurt.

That's why God wants to lift your eyes to the cross. It is there you will find the suffering and death that Jesus endured to pay the penalty for your sins and mine. Interestingly enough, that's exactly what Jesus spoke about with Moses and Elijah on the Mount of Transfiguration. "... Moses and Elijah, who appeared in glory and spoke of His departure, which He was about to accomplish at Jerusalem" (Luke 9:30b-31). Such a strange joining of themes—glory and the cross! God sits high, but looks low.

Several years ago, I was in New York for a meeting of the American Bible Society. One evening the ABS took us to dinner at the top of the World Trade Center. I'll tell you, I felt out of my element. The view of the city was spectacular, but everything on the ground was so small, so insignificant. The Statue of Liberty, for example, seemed only an inch tall from my perspective on the 106th floor.

After dinner, down on the street, it was back to real life. Impatient motorists blowing their horns—as if that would make a difference! Businessmen in suits on cell phones. Daring couriers on ten-speeds. People everywhere. There was a young woman in the crowd, crying. "Why?" I wondered. A beggar holds his hand out. Down here—not up on the 106th floor—was real life.

God comes down in Jesus Christ to give us new eyes, to raise our lowly sights to the glory that will be revealed when He comes to take all His people to be with Moses and Elijah and all the faithful in heaven. Down here, whether it's Manhattan, your town, or mine, is where He comes to meet us.

As Jesus left the mountain for the plain, today He still comes by His Spirit to meet you where you are. In your situation, whatever it may be, as unimportant as you might think you are, down here where you and I live, the words the Heavenly Father spoke from the cloud on the mountain of transfiguration are as timely as ever: "This is My Son, My Chosen One; listen to Him!"

Heavenly Father, open our ears to the words of Your Son Jesus. In His Name we pray. Amen.

1. Who is a mentor or person of strong influence in your life?

2. Why do you think Peter wanted to put up three tents on the mountain of transfiguration?

3. Have you been at an elevation where the world looked very small? How did that impact your perspective?

Use these devotions in your newsletter and bulletin! Used by permission; all rights reserved by the Int'l LLL (LHM).
God sits high, but looks low.
Posted by Kenny at 1:06:00 AM