Standing Strong Through the Storm — ADVANCING THE GOSPEL 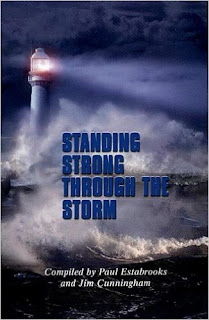 ADVANCING THE GOSPEL
Now I want you to know, brothers and sisters, that what has happened to me has actually served to advance the gospel.
— Philippians 1:12
The Apostle Paul writes these words from prison, but he assures his readers that prison in no way hindered the spread of the gospel but actually advanced it. Then he states in the following verses that he is chained only because of Christ, and because of his imprisonment, others have become bolder and fearless in sharing their faith. And the gospel advances!

A Vietnamese brother, we’ll call Daniel, was led by the Lord to the minister in the north, where he soon found himself amid a revival. The inevitable soon happened, and Daniel was sent to prison, his “training school,” for three years. He shares his experience in prison:

I felt totally deserted. I asked the Lord to take my life. It was too much for me. I prayed a lot, but thankfully the Lord did not do what I asked.

One night in my prison cell, chained to the ground, I saw a vision of the Lord. He did not speak a word. He just placed his hand on me, and I felt how new strength filled my body. I cried and repented before the Lord. Then I knew the Lord was saying to me that He would not allow me to leave this world defeated, that when He takes me “home,” it would be victoriously. The next day the police came and took me to another cell, but I could not walk. After one year, I could walk again.

When I was released, I found that my village church had grown to 500. I know that God has a good plan. He sent me to prison to preach the gospel and so that I may become a strong warrior for Him.

RESPONSE: Today, I will pray differently for brothers and sisters in prison for their faith.

PRAYER: Help me, Lord, to always trust Your plan – even when it seems difficult and overwhelming.

Standing Strong Through The Storm (SSTS), a daily devotional message by SSTS author Paul Estabrooks. © 2011 Open Doors International. Used by permission.
The Apostle Paul writes these words from prison, but he assures his readers that prison in no way hindered the spread of the gospel but actually advanced it.
Posted by Kenny at 1:05:00 AM