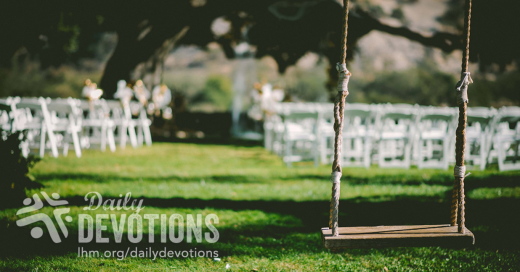 And again Jesus spoke to them in parables, saying, "The kingdom of heaven may be compared to a king who gave a wedding feast for his son, and sent his servants to call those who were invited to the wedding feast, but they would not come. Again he sent other servants, saying, 'Tell those who are invited, "See, I have prepared my dinner, my oxen and my fat calves have been slaughtered, and everything is ready. Come to the wedding feast."' But they paid no attention and went off, one to his farm, another to his business, while the rest seized his servants, treated them shamefully, and killed them. The king was angry, and he sent his troops and destroyed those murderers and burned their city. Then he said to his servants, 'The wedding feast is ready, but those invited were not worthy. Go therefore to the main roads and invite to the wedding feast as many as you find.' And those servants went out into the roads and gathered all whom they found, both bad and good. So the wedding hall was filled with guests ... For many are called, but few are chosen."

This is a weird little story Jesus tells! It starts out normally—a king is throwing a party—but the guests refuse to come.

Please notice that the king is not sending out his servants to invite people to the party for the first time. He did that long ago, and Jesus calls them, "those who were invited." So the bad dinner guests are people who already RSVPed, and are now backing out of their commitment at the last minute. Miss Manners would have a fit!

When the king tries again, they behave even worse. Then the king retaliates. But he is left with the problem of a wedding feast and no guests.

So he sends out his servants to invite anybody they find—people passing by on the way to home or work or school, people in their grubbiest clothes, none of them expecting to be guests of a king. None of them are fit for a royal party, so it's pretty clear that the king is supplying them with clothes as well. His party will be full of people, no matter what he has to do!

The king refers to the first group as "not worthy," which is a pretty huge understatement. But the second group—are they worthy, then? Apparently so. But not because of their character—Jesus calls them "both bad and good." It's not because of their position or connections or anything about them, really. They were just passing by. To be "worthy," all you have to do is show up. Accept the king's invitation. Take the wedding clothes provided for you. Sit down and eat.

This is how it is for us, too, isn't it? Through Jesus' death and resurrection, God has thrown heaven open to everybody, absolutely everybody, who is willing to come. He Himself will provide the food and the proper clothes. Anybody—absolutely anybody—who is willing to trust Jesus' invitation is guaranteed a seat at God's party. We are worthy—not because of who we are, but because of what Jesus has done for us.

Lord, thank You for inviting me. Bring me to Your wedding feast. Amen.

1. Did you ever have someone back out of your invitation at the last minute?

2. How do you think the ruler or leader of your country chooses dinner guests-on what basis?

3. How does God choose guests for His heavenly party?

Use these devotions in your newsletter and bulletin! Used by permission; all rights reserved by the Int'l LLL (LHM).
This is a weird little story Jesus tells! It starts out normally—a king is throwing a party—but the guests refuse to come.