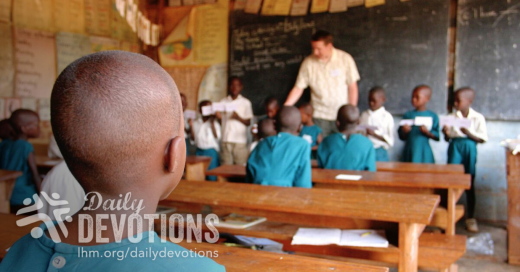 Suspicious to the World
See what kind of love the Father has given to us, that we should be called children of God; and so we are. The reason why the world does not know us is that it did not know Him. Beloved, we are God's children now, and what we will be has not yet appeared, but we know that when He appears we shall be like Him, because we shall see Him as He is. And everyone who thus hopes in Him purifies himself as He is pure.
— 1 John 3:1-3
Have you ever been to an event where you thought you'd fit in, but didn't? It's an awkward feeling. It's especially uncomfortable when the place is familiar and the faces are recognizable, but you're just out of sorts with it all. For whatever reason, you feel isolated, like a stranger, and ill at ease.

I think that's what John is getting at here for believers—that sense of familiarity mixed with not fitting in. As fallen human beings our impulses and preferences are hard wired to the world. We want to be accepted, appreciated, and befriended, and the world will do that—until it sees the glaring "flaw" in our character: that is, Christ in us (see Galatians 2:20). At that point, we become suspect: the "bad apple," a source of concern, and most definitely not a team player.

It's no wonder that it is this way. The world does not produce children of God. Only God can do that (see John 16:13-15). And since we are not of this world, we are estranged: not at home in this place. Jesus was well acquainted with the world's alienation and its hostile nature toward God.

And this is our aim, isn't it: telling others about the Father who sent Jesus to die for their sins? So, while we live in this world—tense as it may be sometimes—we pray and work and witness to those who need to hear about Jesus. This is so they too "may know Him and the power of His resurrection" (Philippians 3:10b) and receive a citizenship that is not of this world, but of the one to come (see Philippians 3:20).

Heavenly Father, strengthen our faith and increase our witness. In Jesus' Name. Amen.

1. How do you try to fit in with people you don't know?

2. Have you ever felt isolated or shunned by others because of your faith?

3. How do you try to make someone who is on the outside feel welcome and valued?

Use these devotions in your newsletter and bulletin! Used by permission; all rights reserved by the Int'l LLL (LHM).
Have you ever been to an event where you thought you'd fit in, but didn't?
Posted by Kenny at 1:06:00 AM