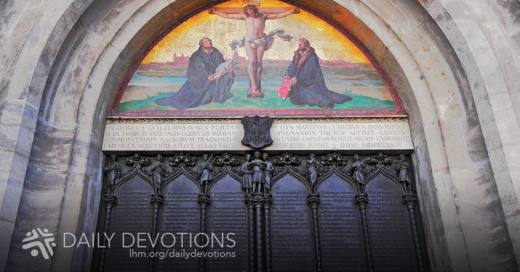 So neither he who plants nor he who waters is anything, but only God who gives the growth.


When some people do a thing well, they often expect praise or recognition for their deed. Truth be told, some people are often entirely preoccupied in their desire for praise for the good things they have done.

Sadly, this all-too-human tendency sometimes manages to creep into the church. You may have met individuals—either clergy and laity—whose itch for public praise draws people's attention away from God, and directs it to themselves.

Now, it occurs to me that if ever there was someone who deserved a palm-branch parade for the work he did, it was the apostle Paul. He was a tireless worker for the Gospel's cause, but rather than receive the praise rightfully due his efforts, he was vilified, bound in chains, thrown in prison, and even placed at death's door—several times.

Yet, in spite of all of this, Paul maintained that Christ should be the center of everything. He does not minimize or discount the work done by himself or others on their missionary journeys, especially at Corinth, but he does point out that they are all merely servants—table workers—whom God has used to carry His message of salvation to the world.

Likewise, those of us who are workers in Christ's church—clergy and laity—don't serve God for our own glory. We don't seek our own glory because to do this we draw attention to ourselves and take honor away from the One to whom it is rightfully due: our Lord and Savior Jesus Christ.

This kind of attitude was what Paul confronted in the church at Corinth. There were believers there who were not living with a Christ-first-and-before-all-things mindset. Instead, some were acting like children—competing with each other, seeking their own way, acting immaturely. Paul writes, "For you are still of the flesh. For while there is jealousy and strife among you, are you not of the flesh and behaving only in a human way?" (1 Corinthians 3:3)

As part of his ministerial duties, Paul took time to address and warn Corinthian Christians about placing emphasis on the human worker and not on their divine Creator, Savior, and Sanctifier. It is God all the way. He provides the nourishment and growth. There is no room for our egos and foolish pride.

These are words we do well to heed. After all, we are the recipients of God's great grace as shown to us in Jesus' life, His suffering, and the cruel cross of Calvary. It is through His sacrifice we are saved, and it is to the Lord that all glory is due.

Heavenly Father, keep us steadfast in Your Word—mindful to live as those before Your throne, as humble servants before an awesome God. In Jesus' Name we pray. Amen.


1. What's your response, typically, to people who seek the attention or applause of others?

2. How do you react to people who should be more mature than they are based on their age and experience?

3. Is there a way to do our work and avoid being "too full of ourselves" when we work hard and accomplish things?

Use these devotions in your newsletter and bulletin! Used by permission; all rights reserved by the Int'l LLL (LHM).
Some people are often entirely preoccupied in their desire for praise for the good things they have done.
Posted by Kenny at 12:06:00 AM