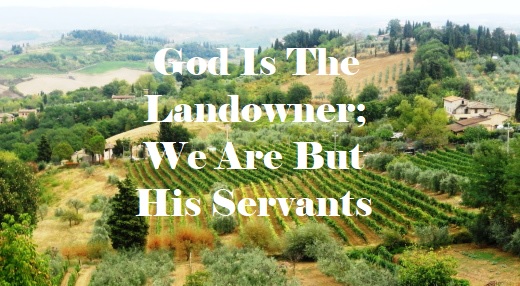 Today, our gospel message comes to us from Matthew 21:33-46, “The parable of the vineyard owner’s son.”

33 “Hear another parable. There was a master of a house who planted a vineyard and put a fence around it and dug a winepress in it and built a tower and leased it to tenants, and went into another country. 34 When the season for fruit drew near, he sent his servants to the tenants to get his fruit. 35 And the tenants took his servants and beat one, killed another, and stoned another. 36 Again he sent other servants, more than the first. And they did the same to them. 37 Finally he sent his son to them, saying, ‘They will respect my son.’ 38 But when the tenants saw the son, they said to themselves, ‘This is the heir. Come, let us kill him and have his inheritance.’ 39 And they took him and threw him out of the vineyard and killed him. 40 When therefore the owner of the vineyard comes, what will he do to those tenants?” 41 They said to him, “He will put those wretches to a miserable death and let out the vineyard to other tenants who will give him the fruits in their seasons.” 42 Jesus said to them, “Have you never read in the Scriptures: “‘The stone that the builders rejected has become the cornerstone; this was the Lord's doing, and it is marvelous in our eyes’? 43 Therefore I tell you, the kingdom of God will be taken away from you and given to a people producing its fruits. 44 And the one who falls on this stone will be broken to pieces; and when it falls on anyone, it will crush him.” 45 When the chief priests and the Pharisees heard his parables, they perceived that he was speaking about them. 46 And although they were seeking to arrest him, they feared the crowds, because they held him to be a prophet. (ESV).

Heavenly Father, you sent your Son to reveal your will for our lives and redeem us from sin and death. Through the power of your Holy Spirit, inspire us with confidence that you are with us in the midst of the storms of life, bring peace to our troubled souls, and lead your church throughout the ages. Enable us to live as your redeemed saints, that our lives may witness to our faith. This we ask in Christ’s holy name. Amen.


“God Is The Landowner;
We Are But His Servants”

Many of the commentaries that I read on our Gospel lesson for this morning seem to indicate that the early church viewed this parable that Jesus told just before his death as an indictment against the Jews of Jesus’ day. As the text itself points out, the chief priests and the Pharisees, who first heard Jesus tell this story, perceived that he had told it as a means of condemning them. They even wanted to arrest Jesus, but for fear of the crowds, who regarded Jesus as a prophet, they refrained from doing so.

However, I am not so convinced that this parable of Jesus can be so easily interpreted to refer specifically to the priests and Pharisees’ rejection of Jesus’ ministry. Oh, I’m sure that the early church, especially as it came to embrace Paul’s teachings, and as faith in Christ spread to the Gentiles, understood it to mean that the kingdom of God was no longer limited to the house of Israel. But I believe that the message of this parable is still relevant for the church of today.

So let’s look at the story. A landowner invested a lot of time, energy, and money to build a business, in this case, a vineyard. He purchased and planted the vines. He built a fence around his property to protect the growth of the plants from animals and scavengers. He constructed a winepress to process the grapes, and no doubt, a building to house the casks to hold the precious juice while it fermented. He even built a watchtower, which served to protect the vineyard from thieves and accommodate those who cared for his business.

Then he leased his business to others to manage it for him. And when the time came for the owner to receive his dividends for his investment, he sent his servants to collect them. But because of the greed of the managers of his vineyard, they refused to give the owner his just return on his investment. They seized the owner’s servants by the neck, beat them, even killing one.

Again, the owner sent other servants to collect his dividends, more than the first time. And again, the managers of his vineyard refused to give the owner his just return and treated the owner’s servants the same way they did the first year.

Of course, as I have retold this story, you may have seen a little similarity to some of the corporate CEO’s, who in this time of economic crisis, have run the companies in which they have been entrusted to manage, into bankruptcy, thinking that the real assets of the business belonged to them. The truth is, there is some similarity in this parable of Jesus to the corporate greed of many of the executives that manage the companies that are owned by investors. And I hope that that changes. But at this point, I am not too optimistic. Greed is a pervasive sin in all of us.

However, the true point of this parable goes much deeper than this. It doesn’t take a brain surgeon to realize that Jesus drew on the story from Isaiah to relate his message to us. And the chilling words of that passage from the great prophet still ring with a resounding blow to our ears. “For the vineyard of the Lord of hosts is the house of Israel, and the people of Judah are his pleasant planting; he expected justice but saw bloodshed; righteousness, but heard a cry!”

This is what makes this such a timeless message. This parable is not merely an indictment against the chief priest and Pharisees of Jesus’ day, as the early church may have interpreted it. It is a message that echoes through the eons of time. God is the owner of the universe, the owner of the vineyard. We are his managers, his servants.

And this timeless message comes to us, as members of Christ’s church, in which God has entrusted to us the managing his vineyard. This is not only an awesome responsibility but also a tremendous evaluation of the ability that God created us to possess. God believes that we can be trusted to manage his kingdom and give him a return on his investment.

The truth is, simply because we have faith in Christ does not exempt us from the powerful message of this parable. Even as Christ’s church members, we need to hear our Lord’s summation of his message. “I tell you, the kingdom of God will be taken away from you and given to a people that produces the fruits of the kingdom.”

Thus, I come to the final points of this message. First, I believe that God does expect a return on his investment. I believe that God expects us to produce fruit in his vineyard. In other words, we are to work to bring people to faith in Christ. We need to tell the story.

To me, this is what it means to return to God the dividends that he deserves. The truth is, unless we continue to work to bring people to faith in Christ, to share the message of God’s Grace with others, sadly, the kingdom may be taken from us.

Secondly, God has been very patient with us from the beginning of creation. As I read this parable, in the context of all of Scripture, the patience of God is one of the most beautiful examples of grace that can be demonstrated. God is patient. He waits on his return for his gracious gift of life, and he waits some more. He sends his servants, prophets, and even his own Son, but all are not taken to heart and received with thanksgiving. After all, we have our own agendas to embrace.

Although the chief priests and Pharisees may have taken the brunt of this parable in the early years of Christ’s church, it still speaks to us today. We need to hear this message, serve our Lord with our labors, and return God his dividend.

Although it is not an easy task, God gives us the power to overcome our temptation to claim his vineyard as our own. Through the readings of our lessons, through the proclamation of this sermon, and in the context of this service, God’s Spirit is at work to remind us of our role to be God’s servants. And as we recall the death and resurrection of Jesus Christ, we are reminded of God’s redeeming grace, which can give us the courage to work for God’s kingdom.

Dear Heavenly Father, through the power of your Holy Spirit, enable us to hear your Word with open hearts and minds, especially as it comes to us through your Son, Jesus Christ. Help us to gain an appreciation for your patient love for us, your servants, that we might return to you the fruits of your benevolence. And above all, may we all come to recognize your redeeming grace in Christ’s death and resurrection. This we ask in his holy name. Amen.


Seeking God?
Click HERE to find out more about how
to have a personal relationship with Jesus Christ

Scripture is taken from The Holy Bible, English Standard Version. ESV® Text Edition: 2016. Copyright © 2001 by Crossway Bibles, a publishing ministry of Good News Publishers.
Sermon contributed by Ronald Harbaugh.
God gives us the power to overcome our temptation to claim his vineyard as our own.
Posted by Kenny at 12:09:00 AM