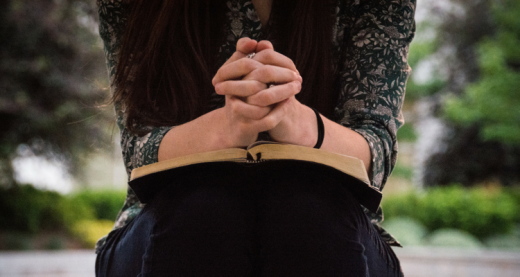 Today, our gospel message comes to us from Matthew 15:21-28, “The Canaanite woman’s daughter is healed.”


21 Then Jesus went thence and departed into the region of Tyre and Sidon.
22 And behold, a woman of Canaan came out of the same region and cried unto Him, saying, “Have mercy on me, O Lord, Thou Son of David! My daughter is grievously vexed with a devil.”
23 But He answered her not a word. And His disciples came and besought Him, saying, “Send her away, for she crieth after us.”
24 But He answered and said, “I am not sent but unto the lost sheep of the house of Israel.”
25 Then she came and worshiped Him, saying, “Lord help me.”
26 But He answered and said, “It is not meet to take children’s bread and cast it to dogs.”
27 And she said, “Truth, Lord; yet the dogs eat of the crumbs which fall from their masters’ table.”
28 Then Jesus answered and said unto her, “O woman, great is thy faith. Be it unto thee even as thou wilt.” And her daughter was made whole from that very hour.

Heavenly Father, you sent your Son to reveal your will for our lives and redeem us from sin and death. Through the power of your Holy Spirit, inspire us with confidence that you are with us in the midst of the storms of life, bring peace to our troubled souls, and lead your church throughout the ages. Enable us to live as your redeemed saints, that our lives may witness to our faith. This we ask in Christ’s holy name. Amen.


“The Faith of a Desperate Mother”

Most of the people who received healing from Jesus were Israelites, kinsmen of Christ according to the flesh. Jesus did indeed heal many people from many different diseases such as blindness, deafness, paralysis, muteness; He even cast out demons. The Gospels have numerous examples where Jesus performed these types of healing for fellow Israelites.

Several things had happened in a seemingly brief period of time, just before this event took place. Beginning in chapter 6, we can read that John the Baptist had been executed. Following this, the disciples and Jesus had fed the 5000 using only five small loaves and a pair of fish. Now they were going to row across the Sea of Galilee to Gennesaret but ran smack-dab into a contrary wind so that they were going nowhere fast. Then they saw Jesus walking on the water, He joined them in the boat, and they reached the other shore.

The last few verses of chapter 6 gives a summary of what Jesus did, mostly healing people. This is quite a contrast to another visit of Jesus and the disciples sometime earlier: Gadara was in the same vicinity, where Jesus had cast a “legion” of evil spirits out of a man. The reaction of the citizens? They begged Jesus to leave! But Jesus had at least one disciple, namely, the man whom Jesus had healed! Could the change in this visit be a result of one man’s testimony?

There was one serious problem, though, and that involved the “mission” of some Pharisees and scribes, who had come from Jerusalem to Gennesaret or Gadara (the east side of the Sea of Galilee)—to either spy or find fault with something, anything, that Jesus was doing. Sure enough, they pounced on the first problem they saw, namely, that the disciples were eating with unwashed hands. The first several verses of chapter 7 have the record of how Jesus answered these folks, plus how He explained some other things to the disciples.

It’s with all of this in mind that Jesus, being human, needed some time alone! Verse 24 states that Jesus didn’t want anyone to know where He was. We can compare this with another time. Jesus was in a house but did not make an effort to let people know where He was. Chapter 2 says that He was in a house, preaching the Word of God to the people, and the people were lined up near the door to the house, keeping the ones who needed healing away from Jesus (accidentally?) and His healing touch. Now He’s in a secluded spot, where He and the disciples could get a little rest and refreshment.

Verse 25 tells us that a woman made one of the most sincere requests for help that we’ll read in the Gospels. Mark also tells us that this woman’s daughter had an “unclean spirit.” Among other things, this tells us that the Devil, the enemy of our souls, was after the youth of that day as well. Think of it: not only was this young girl possessed by an evil spirit, but in Mark 1, there was a man in the synagogue with an unclean spirit, chapter 5 tells about the “maniac of Gadara,” and Luke 9 has the story of a young man who was severely afflicted. Surely this handful of youth were not the only ones who suffered from problems like this. Yet, there was one thing in common: according to the Gospels, when the parents discovered the demon possession and oppression, they did something about it. They got the children to Jesus and asked Him to heal their children!

Another touching thing is that this woman didn’t just ask once. Now, we’re not told how she found out where Jesus was staying, or how it could be possible for Him to heal her daughter, but we do have the record that she came and fell at His feet (verse 25).

Some remarkable things include the fact that the woman was not a Jewish person; instead, she was called “Greek” or a Gentile. She was also a Syro-Phoenician woman, meaning that she lived in the area of Syrian Phoenicia. Something I had forgotten until studying this passage is that there were two, at least, parts of the world named “Phoenicia.” One of these was the area north of Israel and west of Syria itself, or the land of Tyre and Sidon, where Jesus was staying at this time. The other Phoenicia was Carthage, or North Africa, or the land of Hannibal. This woman, then, was a Gentile, a native of Phoenicia, living in the Syria-Phoenicia area. She was about as far away from the blessings and hopes and promises for Israel as possible! But she knew one thing: she believed Jesus could heal her daughter, and she wanted to get that healing.

Reactions are all over the place when discussing the responses of Jesus to this foreign woman. Some might say Jesus was harsh towards the woman, and at first glance, that might be a good perspective. After all, Jesus was in a house, either near the border between Israel and the land of Tyre and Sidon, or on the other side of that border, and He didn’t go there to be recognized. When someone came in, unannounced, and uninvited, repeatedly asking for a miracle, the potential is there for a bit of severity.

Now let’s take a more in-depth look at what both Jesus and the woman both had to say.

First, even though we don’t have these words in this passage, the woman was calling Jesus “Son of David,” according to Matthew’s account (Mt 15:21-28). The problem is this: she was a Gentile and had no real authority to make such an appeal. Jesus Himself gives a bit of friendly reproof when He told her, “I was only sent to the lost sheep of Israel (Mt 15:24)”. That didn’t stop her, as Matthew records that she said, “Lord, help me.”

Second, Jesus tests her faith again. I say that because the woman may have given up after Jesus didn’t answer her (erroneous?) request. She could have said something like, “Oh well, I tried, and He didn’t answer,” but she didn’t. We should remember she was a foreigner but exercised more faith than some Israelites, male or female! When Jesus said it wasn’t right to feed table food to the dogs, He meant (as many commentators observe) the little dogs, the pets, maybe puppies, who were part of the household. Some, incredibly, have tried to use this as an artificial contradiction between here (giving the crumbs to little dogs) and Mathew’s gospel where Jesus said to not give holy things to the (adult) dogs. Something to remember is that few animals were kept in the household and that adult dogs were usually scavengers—wild dogs.

And third, we see the woman’s persistent faith. Jesus did say that it wasn’t right to give table food to the dogs (but surely some children must have tried this!), but He never called her a dog. He was using a figure of speech, and His remarks were designed to test her faith. The woman could have stopped or quit at any time, but she didn’t do it. She replied, in the same spirit, with a bit of humor and good grace: “True, Lord, but even the puppies get the crumbs falling from the table!” People of those days didn’t sit at tables, they reclined on mats or couches to eat, and the “table” wasn’t too far off the ground, according to books on Bible customs and manners. I doubt if any house owner would allow a dog of any size near the evening meal!

So Jesus granted her request. Matthew adds that the woman’s daughter was made whole from that very hour (Mt 15:28). The lesson we can learn from this woman is that Jesus will listen to anyone who calls upon Him and that He will answer according to our faith. The answers may not be as miraculous as this case, but we can trust Him to provide answers He knows are best.

Prayer: Almighty and Ever-living God, keep us in your merciful and loving heart. Heal us in whatever infirmities and illnesses that we have. Like what you had done to the Canaanite woman, have mercy on us too. Strengthen our faith in You through the Holy Spirit that sanctifies and inspires us every moment of our lives. Have mercy on us and show us always the way towards you so we can know you more, follow you more closely, and love you more. This we ask through Christ our Lord, who lives and reigns with you and the Holy Spirit, one God, forever and ever. Amen.


Seeking God?
Click HERE to find out more about how
to have a personal relationship with Jesus Christ

Scripture is taken from The Holy Bible, 21st Century King James Version (KJ21), Copyright © 1994 by Deuel Enterprises, Inc.
Sermon contributed by Jonathan Spurlock.
A Gentile woman had a daughter who suffered from a serious problem. Desperate, she went to find Jesus. What did He do for this woman, and her daughter?
Posted by Kenny at 12:09:00 AM