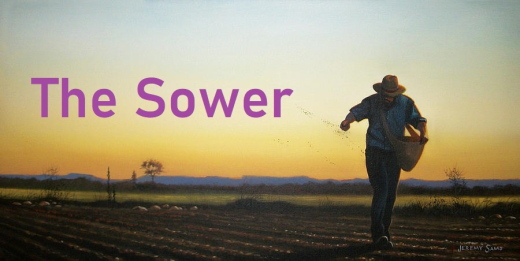 Today, our gospel message comes to us from the 13th chapter of Matthew, beginning with the 1st verse, “The parable of the sower and the seed.”

That same day Jesus went out of the house and sat by the lake. Such large crowds gathered around him that he got into a boat and sat in it, while all the people stood on the shore. Then he told them many things in parables, saying: “A farmer went out to sow his seed. As he was scattering the seed, some fell along the path, and the birds came and ate it up. Some fell on rocky places, where it did not have much soil. It sprang up quickly, because the soil was shallow. But when the sun came up, the plants were scorched, and they withered because they had no root. Other seed fell among thorns, which grew up and choked the plants. Still other seed fell on good soil, where it produced a crop—a hundred, sixty or thirty times what was sown. Whoever has ears, let them hear.”

“Listen then to what the parable of the sower means: When anyone hears the message about the kingdom and does not understand it, the evil one comes and snatches away what was sown in their heart. This is the seed sown along the path. The seed falling on rocky ground refers to someone who hears the word and at once receives it with joy. But since they have no root, they last only a short time. When trouble or persecution comes because of the word, they quickly fall away. The seed falling among the thorns refers to someone who hears the word, but the worries of this life and the deceitfulness of wealth choke the word, making it unfruitful. But the seed falling on good soil refers to someone who hears the word and understands it. This is the one who produces a crop, yielding a hundred, sixty or thirty times what was sown.” (Matthew 13:1-9, 18-23)

Father, You sent your Word to bring us truth and your Spirit to make us holy. Through them, we come to know the mystery of your life. Help us worship you, one God in three persons, And reveal yourself in the depths of our being, by proclaiming and living our faith in you. Grant this through our Lord Jesus Christ, your Son, who lives and reigns with you and the Holy Spirit, one God forever and ever. Amen.

The Parable is the familiar Parable of the Sower. How full of imagery the story is.

The crowds are so large that Jesus gets into a boat so they can see him while he teaches.

We can see Jesus in a boat teaching, and then we can picture in our mind’s eye what he describes.

We can see the Sower of the seeds walking over his lands, sowing seeds by hand scattering them, and falling where they might. Some seeds fall on the hard, well-beaten path and lie there, and the birds come and eat them up.

Other seeds fall on rocky ground, where they do not have much soil, and in that warm soil, they spring up quickly. Yes, the soil is shallow because of the rocks beneath it. For the rock conducts heat and warms quickly. When the sun rises—and this is the intense Mediterranean sun of Israel, they are scorched; and since they have no root, they wither away.

Still, other seeds fall among the thorns, and the thorns grow up and choke them.

Some seeds do fall on fertile soil and bring forth grain, some a hundredfold, some sixty, some thirty.

So Jesus teaches from the boat, and he ends, “Whoever has ears, let them hear.”

Then Jesus leaves the people and goes on with the disciples, and this part is not part of our lesson, but the disciples ask Jesus why he teaches in parables, and he says that the people are not ready to hear what he has to say.

But then he says to the disciples that they are ready, so he says:

“Listen then to what the parable of the sower means:

When anyone hears the message about the kingdom and does not understand it, the evil one comes and snatches away what was sown in their heart. This is the seed sown along the path.

The seed falling on rocky ground refers to someone who hears the word and at once receives it with joy. But since they have no root, they last only a short time. When trouble or persecution comes because of the word, they quickly fall away.

The seed falling among the thorns refers to someone who hears the word, but the worries of this life and the deceitfulness of wealth choke the word, making it unfruitful.

But the seed falling on good soil refers to someone who hears the word and understands it. This is the one who produces a crop, yielding a hundred, sixty or thirty times what was sown.”

The Word of God is something powerful to behold. Jesus says he sows the seeds in our hearts because He loves us. Through His word this day and each day we hear or read that word, he opens the keys to the kingdom of heaven. He sows the word so that we might know the love that the Father has for each of us. He sows that He might claim each of us for eternal life.

In this sense, this is a parable of hope, of grace, and of mercy. It is a parable about the love of God through Jesus to all people everywhere. He sows, period.

In 1918, a notorious criminal named Tokichi Ichii was sentenced to hang.

While in prison in Tokyo, he was sent a New Testament by two missionaries, Miss West and Miss McDonald. After a visit from Miss West, he began to read the story of Jesus and the crucifixion. When he reached the point where Jesus said, “Father, forgive them, for they know not what they do,” something “clicked” within his heart. He wrote:

“I stopped: I was stabbed to the heart, as if by a five-inch nail. What did the verse reveal to me? Shall I call it the love of the heart of Christ? Shall I call it His compassion? I do not know what to call it. I only know that with an unspeakably grateful heart I believed.”

Tokichi was sentenced to death and accepted it as “the fair, impartial judgment of God.” Now the word that brought him to faith also sustained his faith in an amazing way. Near the end, Miss West directed him to the words of 2 Corinthians 6:8–10 concerning the suffering of the righteous. The words moved him very deeply, and he wrote,

“‘As sorrowing, yet always rejoicing.’ People will say that I must have a very sorrowful heart because I am daily awaiting the execution of the death sentence. This is not the case. I feel neither sorrow nor distress nor any pain. Locked up in a prison cell six feet by nine in size I am infinitely happier than I was in the days of my sinning when I did not know God. Day and night… I am talking with Jesus Christ.”

When Tokichi stood on the scaffold with the noose around his neck, with great earnestness, he spoke his last words: “My soul, purified, today returns to the City of God.”

The word was sown into this man’s life, and he was changed.

Jesus sows, period to everyone. Grace, Gospel, Salvation is brought to everyone through the word that is sown.

And it is a comfort to all preachers to know that the Word is sown to everyone by Jesus. So as you read this sermon, I am comforted by the fact that if you fall asleep or your mind wanders or is distracted, the word is still sown by Jesus.

But then there is a part of this parable that strikes us in the heart as we realize that we are the soil. How do we receive the word that is sown? Are we like the path, or the shallow ground? Are we filled with thorns? Or are we the fertile soil in which the Word that is sown is allowed to grow?

There is a sense in this parable that Jesus is asking each of us to look inside and see how we receive his Word. If we had read the chapter preceding this one in Matthew’s gospel, we would have seen that the Scribes and Pharisees attacked Jesus, was denounced by some of the crowd, and was even mocked by his family. He was rejected by the nation of Israel.

Why was he rejected? Why is the Word rejected today? Why does it grow 100 fold in some while the cares of this world smother others?

In one sense, this parable asks this question: Why has the Word of God so often been rejected, repudiated?

The closing story speaks about the kind of soil the Word of God might find.

Which woman would you be?

Two women were hired by a man to make custom-tailored dresses for his clothing store. They were told that not only would they be paid a flat hourly wage for their work, but would also receive a bonus for each dress they completed which was sold. Each week they were given equal amounts of materials to use.

The first woman was not a very careful seamstress and made numerous mistakes, which she had to go back and correct. She also wasted a lot of time taking unnecessary breaks and daydreaming on the job. The second woman was a skilled dressmaker and a very conscientious worker. She worked hard and efficiently and quickly turned the fabric and materials supplied to her into beautiful finished products. She would use up her weekly allotment of material before the week was up, while the other woman never used up the material assigned to her.

It soon became apparent to the man who hired them what he needed to do. He began cutting back on the material given to the first woman and started giving it to the second. The first woman didn’t think this was fair because the second woman was already earning a lot more than she was in bonuses from sales of the dresses she’d made. She became so resentful about this situation that she soon quit her job. The material was then given to the other woman who remained on the job and was able to earn a very good income.

Let us pray: Jesus, you sow yourself—the Word of Truth, generously, the Word of Life, graciously. Defend us from the Evil One who seeks to snatch us away. Fortify us for hard times and costly discipleship that we may endure. Deliver us from distraction from worldly desires and all that would lure us and choke us with false promises. Till us. Turn us. Enrich us with every blessing of your Spirit that we may be good, good soil forever faithful and fruitful for you. Amen.


Seeking God?
Click HERE to find out more about how to have a personal
relationship with Jesus Christ

Scripture is taken from The Holy Bible, New International Version®, NIV® Copyright ©1973, 1978, 1984, 2011 by Biblica, Inc.® Used by permission. All rights reserved worldwide.
Sermon contributed by Tim Zingale.
The Parable is the familiar Parable of the Sower. How full of imagery the story is.
Posted by Kenny at 12:09:00 AM