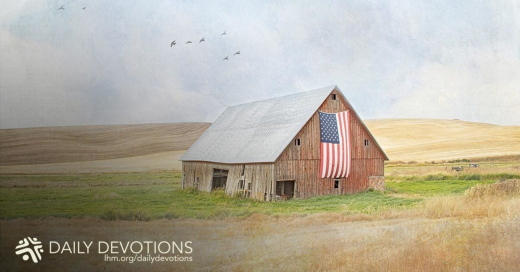 ♫ "Before You, Lord, we bow, Our God who reigns above, And rules the world below, Boundless in pow'r and love. Our thanks we bring, In joy and praise, Our hearts we raise to You, our King!

"Earth, hear your Maker's voice; Your great Redeemer own; Believe, obey, rejoice, And worship Him alone. Cast down your pride, Your sin deplore, And bow before the Crucified." ♫


The author of our hymn is Sir Francis Scott Key, who wrote the familiar lyrics that became America's national anthem. But today's hymn is not about loyalty to an earthly nation. Our hymn is a song of allegiance to the Lord of all nations. "Our God who reigns above" is the King of kings, who "makes nations great, and He destroys them; He enlarges nations, and leads them away" (Job 12:23).

The nations of the earth have their own rulers, and their approach to government takes many forms. Most often the rule is carried out for the good of those whom they govern. Although in some places the ruler may serve evil and selfish ends. Some rulers are monarchs who inherit the throne; others are dictators who take power for themselves by military might, and many are leaders elected by the people they govern. We as Christians are called to honor and obey our rulers, so long as their rule does not lead us in ways that are contrary to God's commands.

Earth's rulers may take up their power in many ways, but the Lord before whom we bow came into His kingly power by allowing His subjects to crown Him with thorns and nail Him to a cross, where He suffered and died for the sins of the world. Jesus our Lord was buried and raised to life on the third day and exalted to reign in glory at the right hand of God. Earthly kings, when faced with rebellious subjects, will often deal harshly with them. Our King came to earth to lay down His life to save us, rebels who rejected His lordship. By the power of the Holy Spirit at work in the Word, we are called to repentance, our sins are forgiven, and we are welcomed into His kingdom.

Our hymn calls on the earth to hear its Maker's voice, a voice heard as "the heavens declare the glory of God" (Psalm 19:1a). But only in God's Word will the earth hear of the Maker's love for the world He created. Jesus, our crucified and risen King, said that repentance and forgiveness were to be proclaimed in His Name to all nations (see Luke 24:47). Through our witness we call on the nations to cast down their pride and deplore their sin. We pray that one day they will acknowledge Jesus as Lord.

The final verse of this hymn is a prayer that, on the Last Day, our native land might send forth from its tombs "a glorious band" to offer eternal praise to heaven's high King. We pray that the Holy Spirit would work through our witness and by the power of the Gospel turn rebels into saints who will joyfully "bow before the Crucified."

THE PRAYER: Lord Jesus, we have heard Your voice in the Word, and we worship You as King of kings. Lead us by Your Spirit to share the Good News of salvation with others. Amen.


1. What characteristics make for a great and noble political leader?

2. How can a person lead a nation and still be obedient to God?

3. If you were the leader of some nation, what three things would you want to be known/remembered for?

This Daily Devotion was written by Dr. Carol Geisler. It is based on the hymn, "Before You, Lord, We Bow." Use these devotions in your newsletter and bulletin! Used by permission; all rights reserved by the Int'l LLL (LHM).
What characteristics make for a great and noble political leader?
Posted by Kenny at 12:02:00 AM