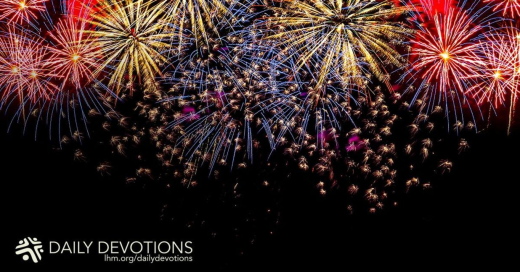 Let us not become weary in doing good, for at the proper time we will reap a harvest if we do not give up. Therefore, as we have opportunity, let us do good to all people, especially to those who belong to the family of believers.

In the United States, on July Fourth, Americans celebrate Independence Day. One of the things that people need to be reminded of is that freedom isn't free. In this world, someone always pays the price for people to be truly free. Consider the signers of the Declaration of Independence, all 56 of them.

Did you know how much they risked for your freedom (assuming you're a citizen of the United States)?

If they won the war with the British, there would still be years of hardship as a struggling nation. If they lost, they would face a hangman's noose. And yet there it is where it says, "We herewith pledge, our lives, our fortunes, and our sacred honor." They signed it, but did you know what price they paid for those signatures?

* that Carter Braxton, a wealthy planter and trader, after signing saw his ships swept from the seas to pay his debts. He lost his home and all of his property. He died in rags;

* that Thomas McKean of Delaware was so harassed by the enemy that he was forced to move his family five times in five months. He served in Congress without pay—his family in poverty, and in hiding;

* that Thomas Nelson, Jr. of Virginia raised $2 million on his own signature for provision for our allies, the French fleet. After the War he personally paid back the loans, wiping out his entire estate; he was never reimbursed by his government. He died bankrupt;

* that John Hart was driven from his wife's bedside while she was dying; his 13 children fled in all directions for their lives. His fields and gristmill were laid waste. For more than a year, he lived in forests and caves and returned home after the War to find his wife dead, his children gone, his properties gone. He died a few weeks later of exhaustion and a broken heart.

Of the 56 signers of the Declaration, few were long to survive. Five were captured by the British and tortured before they died. Twelve had their homes—from Rhode Island to Charleston—sacked and looted, occupied by the enemy, or burned. Two of them lost their sons in the Army; one had two sons captured. Nine of the 56 died in the War from its hardships or merciful bullets. They had learned that liberty is so much more important than security, for that they pledged their lives, their fortunes, and their sacred honor. They fulfilled their pledge; they paid the price, and freedom was born.

It's hard to imagine paying such a price so that others might be free. But then, we're reminded of the price Jesus Christ paid for our freedom, not just politically for the moment, but eternally for all time. In order to save us from our sins, God literally had come into our predicament, as the God-Man, to live our life perfectly, to pay the debt for our sin personally, and to give us the eternal life He earned as a gift, received by grace alone, through faith. When it comes to freedom, I pray that you yearn for the freedom that comes in Christ alone more than any of the other freedoms combined. You'll be blessed if you do!

THE PRAYER: Dear Lord Jesus, thank You for the freedom that You earned for us, that You give by grace to us. Let us joyfully receive that freedom by faith and share it with anyone who will receive it! Amen!


1. How do you celebrate the Fourth of July? Do you have a most-memorable experience?

2. Do you have opportunities to do good that you don't always capitalize on?

3. How much should doing good and helping others out be a part of our lives as Christians?

From "Freedom's Price Has Been Paid ... Serve It Forward," a message from Rev. Dr. Gregory Seltz, former Speaker of The Lutheran Hour. Use these devotions in your newsletter and bulletin! Used by permission; all rights reserved by the Int'l LLL (LHM).
How do you celebrate the Fourth of July? Do you have a most-memorable experience?
Posted by Kenny at 12:02:00 AM