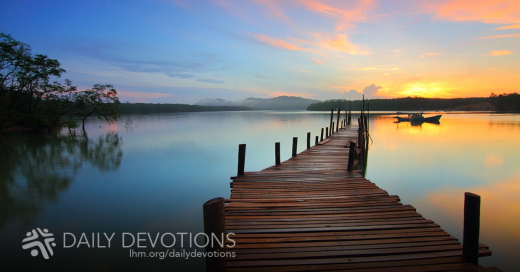 Now when Jesus heard this, He withdrew from there in a boat to a desolate place by Himself. But when the crowds heard it, they followed Him on foot from the towns. When He went ashore He saw a great crowd, and He had compassion on them and healed their sick. Now when it was evening, the disciples came to Him and said, "This is a desolate place, and the day is now over; send the crowds away to go into the villages and buy food for themselves." But Jesus said, "They need not go away; you give them something to eat." They said to Him, "We have only five loaves here and two fish." And He said, "Bring them here to Me." Then He ordered the crowds to sit down on the grass, and taking the five loaves and the two fish, He looked up to heaven and said a blessing. Then He broke the loaves and gave them to the disciples, and the disciples gave them to the crowds. And they all ate and were satisfied. And they took up twelve baskets full of the broken pieces left over. And those who ate were about five thousand men, besides women and children.

Stories in the Bible of Jesus miraculously feeding thousands of people with a pittance of food are sometimes balked at by people who claim these accounts to be an exaggeration.

After all, feeding "five thousand men, besides women and children" with five loaves and a couple of fish is no small feat. Unless the loaves were hundreds of pounds apiece and the fish were tipping the scales at a thousand pounds each, the narrative sounds highly improbable. Wouldn't Matthew think that his readers would shrug off such a story, questioning his recollection of events (all four Gospel writers include it) and writing him off as having lost his marbles?

Wouldn't it make more sense not to include something that would raise so many red flags—no matter how true it was?

But how could he not tell this story?

In fact, to chronicle the life of Jesus, you better be ready to write the unexpected. Let's not forget this feeding miracle was written by the same man who wrote about Jesus cleansing a man of leprosy, calming a storm on the sea, raising Jairus' daughter back to life, and walking on water—a thing that happened the same evening He fed the 5,000-plus men, women, and children (see Matthew 8:1-4, 23-27; 9:18, 23-26; and 14:22-33).

Some worshiped Him. Some doubted what they saw—even though Jesus stood right before their faces. How hard the human heart can be.

THE PRAYER: Thank You, God, for Your faithful servant Matthew. Thank You for the way he simply reported what he saw for the world to read so that we might believe in Your Son You sent to save us. Lead us to trust Your Word, given to us so we might live. In Jesus' Name we pray. Amen.


1. How do you explain the Bible's accounts of Jesus feeding huge numbers of people with small amounts of food?

2. The text says, "And they all ate and were satisfied." What does that mean to you?

3. How does reading about Jesus' miracles empower your faith in Him as your Savior?

This Daily Devotion was written by Paul Schreiber. Use these devotions in your newsletter and bulletin! Used by permission; all rights reserved by the Int'l LLL (LHM).
How do you explain the Bible's accounts of Jesus feeding huge numbers of people with small amounts of food?
Posted by Kenny at 12:02:00 AM