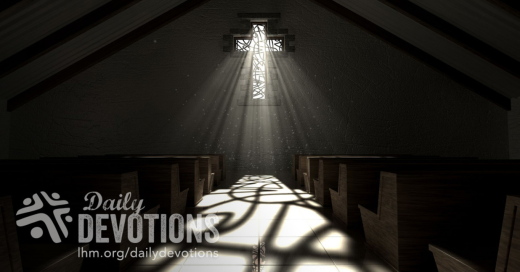 "All Mankind Fell in Adam's Fall"

♫ "All mankind fell in Adam's fall; One common sin infects us all. From one to all the curse descends, And over all God's wrath impends.

"Through all our pow'rs corruption creeps, And us in dreadful bondage keeps; In guilt we draw our infant breath, And reap its fruits of woe and death.

"As by one man all mankind fell, And born in sin, was doomed to hell, So by one Man, who took our place, We all were justified by grace." ♫


"It's not fair!" We may hear those words as a child's complaint in the face of a perceived injustice like an older sibling's privilege of a later bedtime. Yet some adults might respond with the same words upon hearing the truth announced by our hymn: "All mankind fell in Adam's fall." How can it be possible—or fair—that all people throughout history should suffer because Adam and Eve ate the fruit forbidden to them? The hymn goes on to explain, "One common sin infects us all." That first, original sin is passed down from generation to generation like a deadly, inherited disease. Every day we make the same the decision that our first parents made, to say or do or think that which is forbidden to us by God's commands. We choose to do what is wrong and neglect to do what is right, choosing to be "like God," turning from His will and making our own selfish decisions.

The hymn reminds us of that inherited sin: "In guilt we draw our infant breath." That first forbidden fruit in Eden bore the "fruits of woe and death" for us all. The penalty of death for sin was declared by God in Eden and death is the wage that we earn for ourselves (Romans 6:23). Yet still, in Eden, God announced a message of hope. The woman's offspring would come to crush the power of the tempting serpent.

"It's not fair!" It was not fair that Jesus Christ, the woman's offspring, true God and true Man "took our place." He endured the penalty decreed in Eden and took to Himself the wage of death that we earned. Of all people ever born on earth, Jesus alone was innocent of all sin. Jesus perfectly obeyed His Father's will, even to the point of death on the cross. In an uneven exchange that was not at all fair, Jesus took our sin and guilt onto Himself and gave us His own righteousness. For our sake, God made His only Son who knew no sin "to be sin ... so that in Him we might become the righteousness of God" (2 Corinthians 5:21). "As by one man all mankind fell ... So by one Man ... we all were justified by grace." The words of the hymn reflect the Word of God: "Because of one man's trespass, death reigned," but the free gift of righteousness reigns "through the one Man Jesus Christ" (Romans 5:17). No, it was not fair, and through that blessed, unfair exchange, we have forgiveness and eternal life.

THE PRAYER: Lord Jesus, You took our sins onto Yourself and in exchange clothed us in Your righteousness. Justified by grace, through faith in Your Name, we offer to You our praise, now and forever. Amen.

2. How does God's free gift of righteousness reign through Jesus Christ?

3. Do you feel like you're in bondage to any particular kind of sin? How do you deal with this?

This Daily Devotion was written by Dr. Carol Geisler. It is based on the hymn, "All Mankind Fell in Adam's Fall." Use these devotions in your newsletter and bulletin! Used by permission; all rights reserved by the Int'l LLL (LHM).
Have you ever been punished for someone else's wrongdoing? Has someone ever been penalized for something you've done?
Posted by Kenny at 12:02:00 AM