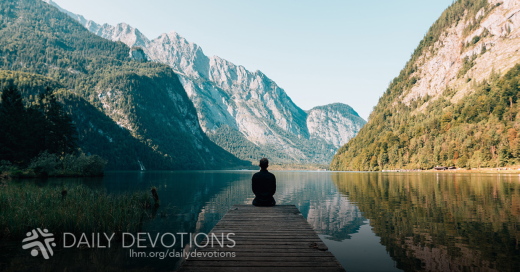 Thus says the LORD, the King of Israel and his Redeemer, the LORD of hosts: "I am the first and I am the last; besides Me there is no god. Who is like Me? Let him proclaim it. Let him declare and set it before Me, since I appointed an ancient people. Let them declare what is to come, and what will happen. Fear not, nor be afraid; have I not told you from of old and declared it? And you are My witnesses! Is there a God besides Me? There is no Rock; I know not any."

Have you ever thought you were alone in a house, only to hear a door open behind you? "Don't be afraid," your spouse or friend says. "It's only me."

God has much the same tone in our reading for today. "Fear not, nor be afraid," He says. "Is there a God besides Me? There is no Rock; I know not any." It's okay. He's the only God out here. We don't need to worry about any other gods sneaking up on us.

That sounds weird to most of us, who have been used to the idea of only one God since we were born. "Well, of course there are no other gods!" we may think. "Why would the possibility worry us? What's this fear thing about, anyway?"

But we are spoiled by our good fortune. Throughout history, humanity has had a tendency to think of gods as bad news—as beings who have to be placated and praised and sacrificed to, or else they will make you sick or kill your family or destroy your farm. Think of the Greek gods from mythology. They are not helpful or kind or benevolent. If they get involved with humanity, it's because they want something. At best they ignore you; at worst .... Let's not go there.

"Well," we may say, "We've come a long way from that." But have we, really? We may not actually worship the so-called "gods" of our own culture, but they exist: money, prestige, power. And those who possess a great deal of these things act like the old Greek gods, don't they? By and large, they use their power to oppress, to harm, to exploit other people. They are not safe gods. They are dangerous.

Against all of this, the real God says to us: "I am the first and I am the last; besides Me there is no god. Who is like Me? Let him proclaim it. Fear not, nor be afraid .... Is there a God besides Me? There is no Rock; I know not any."

We do not have to be afraid of the great powers of our own culture—government overreach, business corruption, greedy and uncaring people who are rich and powerful. They are not gods, no matter how much they may wish us to think so. They do not have ultimate power. That belongs to the true God, to our Rock.

The Lord is our safety, the Rock on which we stand, the refuge that will never fail us. And He will stand firm like a great rock when the power of all these so-called "gods" breaks against Him like ocean waves. We belong to Him; we will not be shattered. This is why we can sing with the writer of Psalm 46: "God is our refuge and strength, a very present help in trouble. Therefore we will not fear though the earth gives way, though the mountains be moved into the heart of the sea, though its waters roar and foam, though the mountains tremble at its swelling" (Psalm 46:1-3).

THE PRAYER: Father, help us to trust in You alone as our safety. Amen.


1. What great powers make you most nervous?

3. The one true God is above every power. How does this strengthen and comfort you?

This Daily Devotion was written by Dr. Kari Vo. Use these devotions in your newsletter and bulletin! Used by permission; all rights reserved by the Int'l LLL (LHM).
What great powers make you most nervous?
Posted by Kenny at 12:02:00 AM