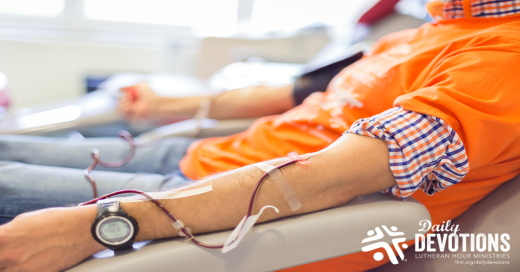 But if we walk in the light, as He is in the light, we have fellowship with one another, and the blood of Jesus His Son cleanses us from all sin.


The records of any church more than one hundred years old will tell you that influenza can be a nasty beast.

If you are a member of such a church, I encourage you to take a quick look at its official records. Beginning with the year 1910, look at the section marked "Deaths." Without sitting by your side, I can tell you what you will find. In 1910, people died from all kinds of diseases and accidents. The same was true in 1911, 1912, and 1913. But when you reach the year 1918, things change. In the Deaths column, you will see one word written over and over again. That word is "influenza." In 1918, the world was brought low by an influenza strain of catastrophic potency: the H1N1 virus. It impacted some 300 to 500 million people and left behind a death toll of somewhere between 30 to 60 million people worldwide.

Scientists say killing strains of the flu like that of 1918 don't happen often, but when they do happen, "Brother, watch out!" Watching out is exactly what the world was doing in 2007 when the "bird-flu," the H5N1 virus, began to rear its ugly head. If that strain of influenza virus began to spread like pandemic flu do, big trouble was on the horizon. It could have been 1918 all over again.

This likely explains why so many people were pleased backed in 2007 when researchers said there was hope. They believed it was possible to stockpile bird-flu antibodies. If they were right, and the stockpiling worked, millions of lives might be saved.

Of course, this begs the question: "Where would we get bird-flu antibodies?" Science once again provided the answer. We can get those antibodies from the blood of people who caught the illness and survived. In short, others may live because of the blood of someone who has defeated death.

The idea of being saved by someone else's blood isn't a new idea. God said the same thing when He inspired the apostle John to write, "the blood of Jesus His Son cleanses us from all sin." St. Paul agreed when he wrote, "In Him (Jesus) we have redemption through His blood, the forgiveness of our trespasses, according to the riches of His grace" (Ephesians 1:7).

Because of Jesus' shed blood on Calvary's cross, we too can be washed of our sins. We are saved by the death-defeating, life-giving blood of Jesus—a spiritual cure promised and delivered by God Himself.

THE PRAYER: Dear Lord Jesus, I give thanks that I have been washed of my sin by Your holy precious blood. In Your Name. Amen.


1. How does the blood of Jesus cleanse anyone from sin?

2. What does walking in the light look like for you?

3. How do you stay mindful each day of Jesus' blood sacrifice for you? Does it impact your thinking in any kind of deep and consistent way?

This Daily Devotion was written by a contributing writer for Lutheran Hour Ministries. Use these devotions in your newsletter and bulletin! Used by permission; all rights reserved by the Int'l LLL (LHM).
How does the blood of Jesus cleanse anyone from sin?
Posted by Kenny at 12:02:00 AM