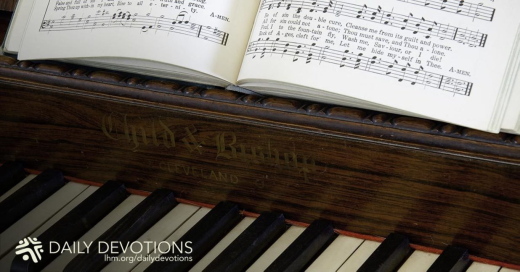 
"Awake, My Heart, with Gladness"

♫ "At the Lamb's high feast we sing, Praise to our victorious King, Who has washed us in the tide, Flowing from His pierced side. Alleluia!

"Where the paschal blood is poured, Death's dread angel sheathes the sword; Israel's hosts triumphant go, Through the wave that drowns the foe. Alleluia!" ♫


God's mighty acts throughout history provided living images of the grace to be revealed in His promised Messiah. For example, God saved Noah and his family from the catastrophic flood, bringing them "safely through water," an event, Scripture says, that corresponds to Baptism (1 Peter 3:20-21). Another example: although God had commanded the sacrifice, He stopped Abraham from harming his only son Isaac and provided a ram as a substitute. No one prevented the death of God's only Son, who was offered up as the perfect sacrifice for the sins of the world. Another example: Joseph, sold into slavery by his brothers, was raised up from a prison pit to rule Egypt. Jesus our Savior, betrayed and sold, was raised to life from the pit of death to reign as King of kings.

In an event that closely mirrors our salvation in Christ, God set His people free from slavery in Egypt. As Pharaoh's heart hardened in refusal, God delivered the final blow—the firstborn of Egypt were killed. Israel's firstborn were spared as God passed over homes marked with the blood of slain lambs. Fleeing Egypt, the Israelites became trapped between the Red Sea and Pharaoh's chariots. God opened a way through the sea and Israel crossed safely on dry land. The walls of water swept back into place and drowned the pursuing enemy.

Our hymn uses images of the Exodus to celebrate the victory of Jesus, the Lamb of God, whose blood now marks our lives. The paschal, or Passover, blood we receive in Jesus' holy Supper was shed for the forgiveness of our sins, and where sins have been washed away in the blood "flowing from His pierced side," death has no power. Already buried and raised with Christ in Baptism, when the Lord calls us home to Himself, we will pass safely through the flood tide of death into eternal life. Until that day, we celebrate the Lamb's high feast, receiving His body and blood, given and shed for us, a foretaste of the feast still to come—the great wedding feast of the Lamb.

Israel stood on the far shore of the Red Sea and praised God for His victory over Pharaoh's pursuing host: "I will sing to the LORD, for He has triumphed gloriously ... Who is like You, O LORD, among the gods? Who is like You, majestic in holiness, awesome in glorious deeds, doing wonders? (Exodus 15:1b, 11b). Our hymn is a rehearsal for future praise, because we have seen God's saving acts in Christ. One day we will stand on the shore of the crystal sea and sing with all the saints the song of Moses and the song of the Lamb: "Great and amazing are Your deeds, O Lord God the Almighty! ... For Your righteous acts have been revealed" (Revelation 15:3b, 4b).

THE PRAYER: Lord Jesus, Lamb of God, You have triumphed gloriously! Now and forever, we will praise Your holy Name. Amen.


1. Does God still do mighty acts in the world today? If so, can you name one or two?

2. What sort of spiritual connections do you see between the Exodus and the Passover?

3. Do you celebrate Passover in any special way? What do you do?

This Daily Devotion was written by Dr. Carol Geisler. It is based on the hymn, "At the Lamb's High Feast We Sing." Use these devotions in your newsletter and bulletin! Used by permission; all rights reserved by the Int'l LLL (LHM).
Does God still do mighty acts in the world today? If so, can you name one or two?