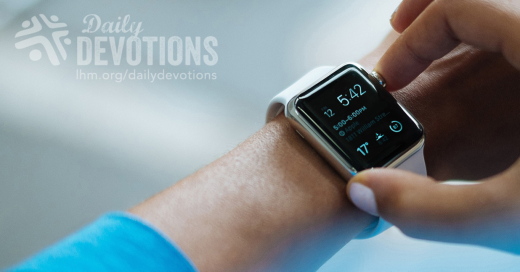 In the first book, O Theophilus, I have dealt with all that Jesus began to do and teach, until the day when He was taken up, after He had given commands through the Holy Spirit to the apostles whom He had chosen. He presented Himself alive to them after His suffering by many proofs, appearing to them during forty days and speaking about the kingdom of God. And while staying with them He ordered them not to depart from Jerusalem, but to wait for the promise of the Father, which, He said, "You heard from Me; for John baptized with water, but you will be baptized with the Holy Spirit not many days from now."


Some of the toughest times in life are the "interim" times. People in business who have been appointed to temporary management positions have discovered it is very difficult to function in that capacity. Most of us find that these kinds of times in our lives—times when we're waiting for things to transition back to "normal"—can be difficult to get through.

Jesus' disciples were faced with one of these periods between the time when Jesus rose from the dead and when the Holy Spirit came to them 50 days later on Pentecost. This was probably a trying and puzzling time for Jesus' followers. They experienced Jesus' ascension into heaven which certainly would have been a faith-strengthening event, but still they had to wait in Jerusalem for the Holy Spirit's arrival.

Waiting in Jerusalem may have been something they wanted to avoid altogether. After all, the intense spectacle of the crucifixion was still fresh on everyone's mind, and—not wanting to suffer a similar fate—blending into the countryside would have been nice.

Like the first disciples, we live in an in-between period, too—the time between our Lord's initial coming to earth and the time when He will come again. In a sense, this is a difficult period for us well. But just as our Lord told His disciples what they were to do in the meantime, so He has instructed us on how we are to live in our interim existence.

We are to devote ourselves to prayer and the study of His Word (see Acts 6:4), and we are to be His witnesses in the world (see Acts 1:8). If we live now according to His will, then our lives will be meaningful to us and will be lived to His glory.

For us in the present age who live between our Lord's first arrival and His future return, waiting for His second coming is not to be a time of passive inactivity. Rather, it is to be a time of doing His will and spreading the Good News of Jesus as Lord and Savior.

THE PRAYER: Heavenly Father, as we wait for the coming of Your kingdom, make us good stewards of time and the message of life You have entrusted to us. In Jesus' Name we pray. Amen.


1. Have you gone through significant periods of waiting in your life? What were you waiting for? How did that turn out?

2. What kind of thoughts do you think would be running through your mind to see Jesus alive after the horrible way He died? Relief? Skepticism? Thankfulness? Anything else?

3. As believers, how can we weather the demanding interim periods we face in life?

From The Lutheran Layman, May 1980 issue, "Life in the 'Interim' Times" by Ron Schlegel. Use these devotions in your newsletter and bulletin! Used by permission; all rights reserved by the Int'l LLL (LHM).
Have you gone through significant periods of waiting in your life? What were you waiting for? How did that turn out?
Posted by Kenny at 12:02:00 AM