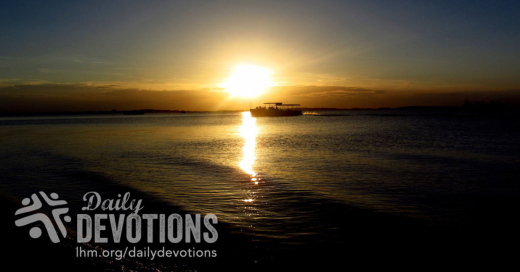 Passing alongside the Sea of Galilee, He (Jesus) saw Simon and Andrew the brother of Simon casting a net into the sea, for they were fishermen. And Jesus said to them, "Follow Me, and I will make you become fishers of men." And immediately they left their nets and followed Him. And going on a little farther, He saw James the son of Zebedee and John his brother, who were in their boat mending the nets. And immediately He called them, and they left their father Zebedee in the boat with the hired servants and followed Him.

Imagine a young boy named James. As a boy, he watched his father and others in a profession that had been in the family for generations. It was his destiny. He would be in the seafood business, and probably little else in the way of professions even crossed his mind.

It's the story recorded in our Gospel text—the story of a great change in plans for James and his brother John, and for two others, Simon and Andrew, who were also called by Jesus into a whole new way of life. I'm not sure how God prepared these four to make such a radical shift in their lives, but they accepted Jesus' invitation to join in the cause of proclaiming the Gospel of God. I don't know how they did it, but I know God had a plan for them.

Well, God has a plan for you, too. Maybe God's plan of salvation for you has yet to be fulfilled. If you have not yet received the gift of faith in Jesus as Lord and Savior—that is, the greatest gift you could ever receive—Jesus is still calling (see Revelation 3:20). He cares. He wants you to be a part of His family. Once you receive God's gift of faith, you can be sure He has a plan for you, and it may involve a change in your plans.

There are many with a wide variety of backgrounds, abilities, experiences, and degrees, who are now church workers because God had a plan for them—not unlike James and John and Simon and Andrew. Heeding God's call you might volunteer at a women's shelter or homeless facility. Maybe you can teach English as a second language. You might help landscape a nursing home, update an aging computer system, or play a cello at your church. Maybe you'll work with those who are sick or in hospice care.

The list is endless. Still, some of you may be saying, "You know, I have thought about that, but I don't have the courage or confidence to follow through." Well, if you're reluctant, think of Moses. He balked at being the one to lead God's people out of Egypt. "Not me, God, I can't even talk straight," was his response. "You want me to do what!?" And yet the seemingly unprepared and stammering Moses accomplished great things—all by God's grace.

Today, and in the days ahead, pray for the wisdom to grasp the plan God has for you. Pray for the courage to step out in faith. Pray that you may always be open to God's leading. As God already knows, the plans He has for you are the best plans of all (see Jeremiah 29:11).

THE PRAYER: Heavenly Father, change our lives to follow You and be more like Jesus. In His Name. Amen.


1. As a kid did you have a decent idea what you wanted to be or do as an adult? Are you anywhere "in the ballpark" of that early aspiration?

2. How responsive do you think you would be to someone telling you to "Come, follow me"? What would you need to know first?

3. Have you ever wanted someone to follow you for his or her own benefit? Did the person do that?

Taken from "A Change in Plans," a message excerpt by Rev. Dr. Paul Devantier. Use these devotions in your newsletter and bulletin! Used by permission; all rights reserved by the Int'l LLL (LHM).
As a kid did you have a decent idea what you wanted to be or do as an adult? Are you anywhere "in the ballpark" of that early aspiration?