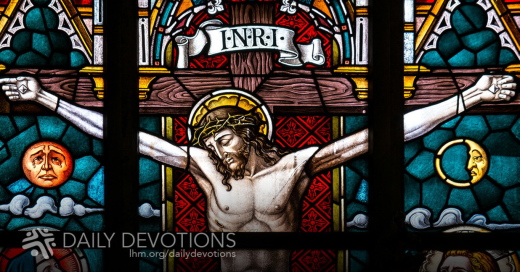 For this is a gracious thing, when, mindful of God, one endures sorrows while suffering unjustly. For what credit is it if, when you sin and are beaten for it, you endure? But if when you do good and suffer for it you endure, this is a gracious thing in the sight of God. For to this you have been called, because Christ also suffered for you, leaving you an example, so that you might follow in His steps. He committed no sin, neither was deceit found in His mouth. When He was reviled, He did not revile in return; when He suffered, He did not threaten, but continued entrusting Himself to Him who judges justly. He Himself bore our sins in His body on the tree, that we might die to sin and live to righteousness. By His wounds you have been healed. For you were straying like sheep, but have now returned to the Shepherd and Overseer of your souls.

It's easy to forget the books of the Bible were written by those who were in the thick of it. The apostles wrote from inside a world that, for the most part, was anything but thrilled with their message. This weird Jesus sect—reviled by the Jews, misunderstood and oppressed by the Romans, scoffed at by the Greeks—was not in the good graces of anyone. And the message they shared—one of enduring through sorrow and physical suffering—was certainly not the stuff to win converts to their cause.

How could remaining steadfast in the face of unjust ridicule or bearing up under persecution be in any way noble, even honorable? Aren't these things to react against, standing one's ground in the face of his or her oppressor, even letting it come to blows if it has to? After all, the Savior suffered enough. God knows He suffered enough! When do we get to bring the hammer down on those who mock God and demean us for our faith? When is enough enough?

One might think it was enough a long time ago, but that's not the way God works, is it? His Son-spoken truths haven't been given to us for us to wedge them into our perverse way of thinking, jamming them into our mistaken ideas of what we think victory with God should look like.

No, God's ways are a radical departure from our own, and let us thank Him for that!

Peter's colleague Paul said it well when he wrote, "For since, in the wisdom of God, the world did not know God through wisdom, it pleased God through the folly of what we preach to save those who believe. For Jews demand signs and Greeks seek wisdom, but we preach Christ crucified, a stumbling block to Jews and folly to Gentiles. but to those who are called, both Jews and Greeks, Christ the power of God and the wisdom of God. For the foolishness of God is wiser than men, and the weakness of God is stronger than men" (1 Corinthians 1:21-25).

THE PRAYER: Heavenly Father, give us Your Holy Spirit to lift us up under life's strain so we might live as Your people. In Jesus' Name we pray. Amen.


1. Have you ever had to square off with a bully? How did that turn out for you?

2. Are you able to keep from lashing out at others who offend you? What's the secret to your success?

3. How can we get beyond the knee-jerk reaction we might have toward people or circumstances that irritate us? It is all willpower? Can God help us overcome these negative reactions? How?

This Daily Devotion was written by Paul Schreiber. Use these devotions in your newsletter and bulletin! Used by permission; all rights reserved by the Int'l LLL (LHM).
Have you ever had to square off with a bully? How did that turn out for you?
Posted by Kenny at 12:02:00 AM