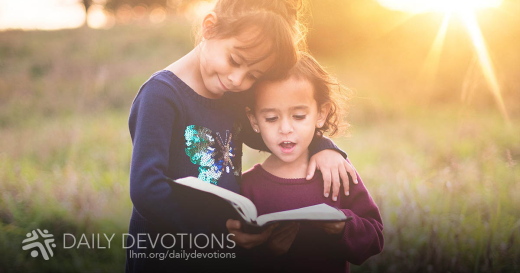 For a day in Your courts is better than a thousand elsewhere. I would rather be a doorkeeper in the house of my God than dwell in the tents of wickedness. For the LORD God is a sun and shield; the LORD bestows favor and honor. No good thing does He withhold from those who walk uprightly. O LORD of hosts, blessed is the one who trusts in You!

Our psalm is a song of the sons of Korah who, in addition to their choral duties, were "keepers of the thresholds of the tent" of meeting, ancient Israel's sacred tabernacle (see 1 Chronicles 9:19). That was their inherited task, one in which the faithful sons were happy to serve. It was better to be a doorkeeper in the holy place where God met His people than to "dwell in the tents of wickedness."

The door-keeping duties continued after the great stone temple was built in Jerusalem. It was the place where sacrifices were offered and where God met His people. Then, at the appointed time, God sent His Son into the world, Jesus the Messiah, who said of Himself, "I tell you, something greater than the temple is here" (Matthew 12:6). Jesus is the Word who was and is God, the Word who "became flesh and dwelt among us" (see John 1:1, 14). The phrase "dwelt among us" can also be translated as "tented among us." In Jesus, God pitched His tent in the world. He came to meet us, not in a tent of fabric or a temple of stone, not in a cloud of glory or pillar of fire, but in Person: in the flesh.

Greater than the temple, Jesus, our High Priest and the Lamb of God, offered Himself as the perfect sacrifice for the sins of the world. By His death and resurrection, He opened for us "the new and living way" into the presence of God, through the temple curtain—the door—of His own flesh (see Hebrews 10:20). Redeemed and forgiven, we happily come together for worship, joining Korah's sons to sing, "A day in your courts is better than a thousand elsewhere." We would rather be there than anywhere else! In God's house, the Savior who once tented among us comes to meet us in His Word and in His body and blood in His Holy Supper. Something greater than the temple is here!

On a day yet to come, our Lord Jesus will return in glory as King and Judge. All who trust in Him will be bodily raised from death, as He was raised. God will create a new heaven and a new earth and "the dwelling place of God" will be with His people as He pitches His tent among us for all eternity (see Revelation 21:3). He will be our sun and shield and temple. "No good thing does He withhold from those who walk uprightly," sang the sons of Korah, a song reflected in a later promise: "He who did not spare His own Son but gave Him up for us all, how will He not also with Him graciously give us all things?" (Romans 8:32)

THE PRAYER: Lord Jesus, You are our sun and shield and the door to eternal life. Accept our grateful praise, now and for all eternity. Amen.

This Daily Devotion was written by Dr. Carol Geisler. Use these devotions in your newsletter and bulletin! Used by permission; all rights reserved by the Int'l LLL (LHM).
Do you feel like you have a particular job title in God's service?