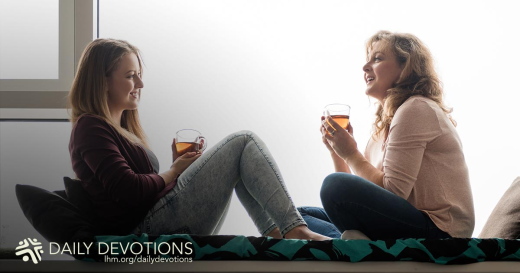 "For All the Faithful Women"

"For all the faithful women who served in days of old, To You shall thanks be given; to all, their story told. They served with strength and gladness in tasks Your wisdom gave. To You their lives bore witness, proclaimed Your pow'r to save.

"For Ruth, who left her homeland and ventured forth in faith, Who pledged to serve and worship Naomi's God till death, We praise You, God of Israel, and pray for hearts set free, To bind ourselves to others in love and loyalty."

Ruth is one of four women listed in Jesus' family tree: four women who share a certain notoriety. Tamar was involved in an incestuous relationship, Rahab was a prostitute, and the wife of Uriah committed adultery with King David. Ruth was not an Israelite; her homeland was Moab, the land to which the family of her mother-in-law Naomi fled during a famine in Israel. Naomi's sons took Moabite wives, one of whom was Ruth, but after Naomi's husband and sons died, the widowed mother prepared to return to Israel.

Although Naomi protested the decision, Ruth was determined to return with her mother-in-law to Bethlehem. Ruth promised to take Israel and Israel's God as her own and pledged to keep that promise faithfully until death. Ruth married Naomi's kinsman, a man named Boaz. Obed, the son of Ruth and Boaz, became the father of Jesse who, in turn, became the father of David, Israel's great king. Ruth of Moab and her great grandson David became ancestors of a greater king, the Son of David, Jesus our Lord.

It is fitting that Jesus should have both Jews and Gentiles—those who, like Ruth, are not descendants of Abraham—in His family tree, for He is not only Israel's Messiah, but the Lord of all nations. He came, as the apostle Paul writes, to reconcile both Jews and Gentiles to God through His death on the cross. Called from every nation, the redeemed in Christ are now "fellow citizens with the saints and members of the household of God" (Ephesians 2:19).

God in His grace gave Ruth, who returned to Bethlehem with Naomi, a place in the genealogy of Jesus His Son, the Child of Bethlehem and Savior of the nations. As Ruth faithfully pledged her love and loyalty to Naomi, we too "bind ourselves to others in love and loyalty." We do so in the Name of Ruth's great descendant, the promised Son of David, who bound Himself to the world in love, even to the point of death on the cross. The Lord of nations, by His death and resurrection, overcame sin, death, and Satan, reconciling both Jews and Gentiles to God. We pray that the Holy Spirit, at work through our service and witness, will continue to bring people of every nation into the household of God.

THE PRAYER: Lord Jesus, like Ruth, who pledged her love and loyalty to Naomi and to the God of Israel, we pledge ourselves to worship in Your holy Name and to lives of love and service to others. Help us by Your Spirit to be faithful to our promise. Amen.

This Daily Devotion was written by Dr. Carol Geisler. It is based on the hymn, "For All the Faithful Women." Use these devotions in your newsletter and bulletin! Used by permission; all rights reserved by the Int'l LLL (LHM).
Can you name other women besides those mentioned here who played prominent roles in either the Old or New Testaments?